A New Zealand-resident Thai woman accused of a lese majeste offence did not show up for a flight to Auckland yesterday after police admitted her to hospital. 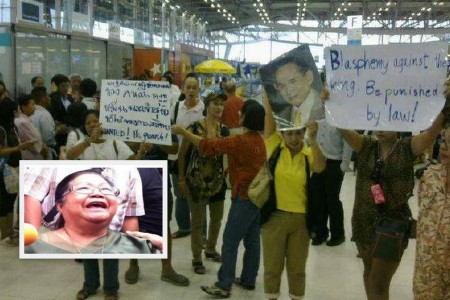 Self-appointed yellow shirt vigilantes showed up at the airport, supposedly to ensure that Thitinant Kaewchantranont (inset) did not leave for New Zealand. (Post Today photo)

About 200 people had turned up at Suvarnabhumi airport to protest against her possible departure.

Protesters picketed outside the airport after learning that Thitinant Kaewchantranont, 63, was due to check in for a Thai Airways International (THAI) flight to Auckland.

Danuj Bunnag, managing director for THAI's ground services business unit, said Ms Thitinant did not arrive at Suvarnabhumi to check in for the flight, although her husband, a New Zealand national, did get on board.

Ms Thitinant has a history of mental illness.

Thung Song Hong police in Bangkok, who have lodged a lese majeste complaint against her, referred her to Srithanya Hospital in Nonthaburi to see if she is genuinely mentally ill. 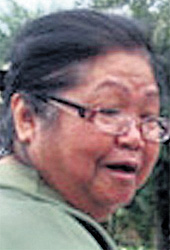 She has since been referred to the Galaya Rajanagarindra Institute.

She was admitted to the hospital on Friday last week after allegedly making an improper gesture towards an image of His Majesty the King outside the Constitution Court on the same day.

Police said that if Ms Thitinant had shown up at the airport, officers would have prevented her from boarding, as they believed she was unfit to leave the country.

A THAI source said the plane's captain had pledged to refuse to pilot the aircraft if Ms Thitinant was on board, arguing the woman could pose a security risk.

Protesters left the airport after they were told Ms Thitinant had not turned up for the flight and was being assessed at a hospital.