Red-shirt co-leader Arisman Pongruangrong will give away 64,000 doughnuts to underprivileged children and adults to mark the 64th birthday of ousted prime minister Thaksin Shinawatra next Thursday. 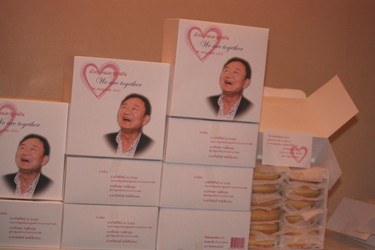 Mr Arisman made the pledge at a news conference on Friday. He was accompanied by Darunee Kritboonyalai, a key supporter of the red-shirt movement; Jiradej Worapiankul, vice minister for finance; and Pol Maj Gen Peerapan Prempooti, former secretary-general of the Anti-Money Laundering Office.

The former singer and MP, who also spent several months on the run after the political violence of May 2010, called the doughnut giveaway a gesture of national reconciliation.

After six months of keeping a low profile, Mr Arisman said, he decided to use Thaksin’s birthday to do something to promote unity in the country. He said any group interested in joining him in the project was welcome, and those wanting more doughnuts should feel free to ask.

Shown at the news conference was a pink box containing 12 doughnuts and a card with the written message: "On the occasion of my birthday, may love, sweetness and harmony be upon you. With love and bonding, Pol Lt Col Thaksin Shinawatra, July 26, 2012." The date is Thaksin’s birthday.

On the lid of the box is the message: “With love and bonding. We are together. July 26, 2012." On the left side the message reads: "64,000 Harmony Doughnuts from our hearts to all parts of Thailand. Please eat immediately". On the upper front: "Brought to you by Mr Kittiratt Na-Ranong, Deputy Prime Minister and Finance Minister, Mr Jiradej and Mr Arisman."

The giveaways will be made nationwide starting on Monday and will end on Aug 3.

Mr Arisman said he had initiated the event himself and it had nothing to do with Thaksin. However, he said he informed the fugitive former premier about it. 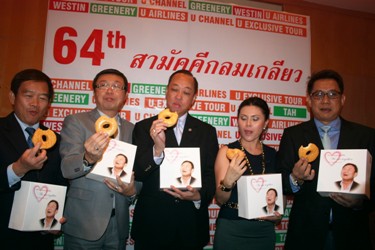 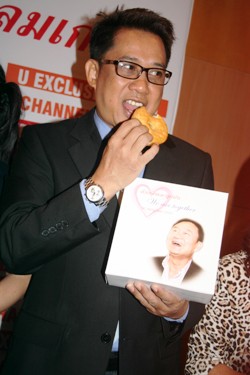