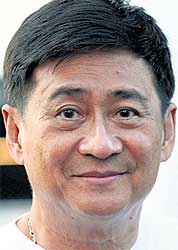 As national police chief, Pol Gen Priewpan had to arrest Thaksin when he met him, they claimed.

Thaksin is in self-imposed exile to escape a two-year prison term for helping his wife purchase a plot of state land in Bangkok during his stint as premier.

Deputy Prime Minister Chalerm Yubamrung Wednesday responded to the criticism saying he did not think Pol Gen Priewpan violated any law by meeting his former brother-in-law, who is celebrating his 63rd birthday in Hong Kong today.

"Why was it inappropriate?" Mr Chalerm shot back when asked to comment by reporters.

He said Pol Gen Priewpan had taken leave to travel to Hong Kong, and could not be considered to have failed to perform his duty because the national police chief had no duties to perform overseas.

"Our laws do not apply in Hong Kong," Mr Chalerm said.

Asked if he was planning to take disciplinary action against Pol Gen Priewpan, Mr Chalerm said he would not take any such action.

"I will only ask what the [ex-] brothers [in-law] discussed," he said, adding those who criticised the government never looked at things positively.

Pol Gen Priewpan left for Hong Kong from Suvarnabhumi airport on Tuesday morning to extend his birthday wishes to Thaksin.

He reportedly took leave of duty on Tuesday to make the trip.

Pol Gen Priewpan told reporters he had only accepted Thaksin's invitation and they had no special issues to discuss.

Wanchai Sornsiri, a senator and an executive member of the Lawyers Council of Thailand, commented that Pol Gen Priewpan did not commit any wrongdoing by meeting Thaksin abroad.

He said the national police chief was duty-bound to arrest a violator of the law with an outstanding arrest warrant against him, but if the violator was in another country a Thai arrest warrant could not be applied.

Authorities would instead have to use diplomatic channels to seek extradition from overseas.

"Although travelling to meet Thaksin does not violate the law, it shows a disregard for ethics and this is a serious problem for a government official. This is very much inappropriate," Mr Wanchai said.

"How did the national police chief have a friendly meeting with a fugitive who is fleeing an arrest warrant? They are relatives, but as the police chief he must think about the country before personal interest," he said.

In 2008, the Supreme Court's Criminal Division for Political Office Holders sentenced Thaksin to two years in prison for helping his former wife Khunying Potjaman na Pombejra buy prime state land in the Ratchadaphisek area of Bangkok when he was prime minister in 2003.

Thaksin fled the country after receiving bail to attend the opening ceremony of the Beijing Olympics just before the court handed down its sentence.

Pol Gen Priewpan is an elder brother of Khunying Potjaman. He will retire on Sept 30.

There are rumours that he has been approached to take up a deputy prime minister portfolio in the Pheu Thai government in a cabinet reshuffle expected soon.

Pol Gen Priewpan has denied the rumour. However, he earlier said that if he was to take a political position, he would like to be responsible for narcotic suppression work only.