Thousands of mourners, including key red-shirt figures, converged yesterday at the cremation of Ampon ''Ah Kong'' Tangnoppakul, whose death has focused attention on the plight of lese majeste prisoners in Thailand. 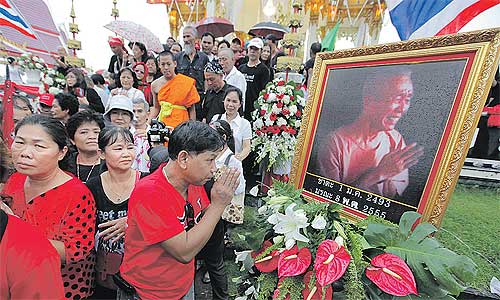 A man performs a wai to a picture of Ampon ‘Uncle SMS’ Tangnoppakul, the lese majeste prisoner who died from cancer inside prison in May. Thousands of mourners attended his cremation ceremony at Wat Lat Phrao in Bangkok yesterday. PATTANAPONG HIRUNARD

Ampon, who was sentenced to 20 years in jail last November for sending text messages deemed as insulting to the monarchy, died from liver cancer on May 8 in a Bangkok prison hospital.

Mourners attending Ampon's funeral yesterday were given a 112-page commemoration book titled Rak Oey (Love), a biography of Ampon based on interviews with his wife, Rosmalin. The couple were married for 44 years.

Ampon's two sons ordained as monks to make merit for their father.

''I couldn't help sobbing as I heard the signal for the cremation,'' said Ms Rosmalin who was standing near the crematorium to thank streams of mourners amid the rain.

Ampon's death has provoked concerns about the increasingly harsh application of Section 112 of the Penal Code, or lese majeste law.

No cabinet members showed up at the cremation.

Other key figures at the cremation were pro-democracy academics Somsak Jeamteerasakul, Pichit Likhitkitsomboon as well as several Thai and foreign human rights activists.

Mr Somsak said the court's repeated rejection of Ampon's bail requests on the grounds that he might jump bail were ridiculous for a man in his 60s who was in frail condition.

The Yingluck government, particularly Justice Minister Pracha Promnok, should also be held responsible for the death of Ampon because it was their duty to transfer lese majeste offenders to the temporary prison for political prisoners at Laksi, he said.

''It is a pity the government is so concerned about its own stability; hence choosing not to act on [behalf of] the lese majeste prisoners,'' said Mr Somsak.