Amid widespread calls for reconciliation, Democrat Party leader Abhisit Vejjajiva has accused the government of doing the opposite by allowing his party's opponents to freely attack opposition members. 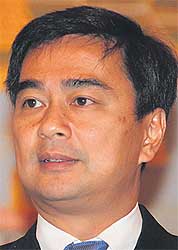 Mr Abhisit conceded the opposition party was now working under difficult circumstances as it has been criticised by the mainstream media, especially big newspapers, and abused by its political rivals.

The Democrat leader said someone attempted to hit him with a car in Chiang Mai when he went there recently.

The government has not called on its supporters to promote reconciliation, but instead is stirring hatred and endless division, Mr Abhisit told the Bangkok Post in an exclusive interview.

The violent activities are being committed despite the government's push for reconciliation, he said.

"I never feel upset when facing hardship from work. This is what I call a standard of political leadership," Mr Abhisit said.

Mr Abhisit also claimed the ruling party had attempted to unseat him as the party's chief as he was the one with whom they could not compromise.

"It is only a made-up story released by former Prime Minister Thaksin Shinawatra and the Pheu Thai Party. Mr Thaksin has tried to negotiate with a number of people from early this year, except me.

"They have to find a way to discredit me," Mr Abhisit explained.

He also criticised Thaksin for allegedly trying every means to come back to Thailand without being punished.

Mr Abhisit said no opposition leaders in the past had done as much as he had accomplished in just one year.

He said the Democrat Party had joined hands with the civil sector to help flood-hit people in vast areas.

The party also took part in deliberating bills in parliament as well as pointing out the problems of the administration's policies, including the rice pledging programme, he added.

Mr Abhisit called on the government not to put pressure on the court, prosecutors and the Department of Special Investigation (DSI) as they look into the background of the 2010 political violence.

"If reconciliation is the target, the truth must be established. Do not try to put pressure on the fact-finding officers," he said.

With regards to the upcoming Bangkok governor election, he said the Democrat Party was still in the process of selecting its candidate.

However, Bangkok Governor MR Sukhumbhand Paribatra has declared his intention to stand for a second term, he added.

MR Sukhumbhand had to speed up his work as he faced many obstacles when working with the government, the party leader said. He praised MR Sukhumbhand's performance in handling last year's flood crisis and his commitment to the rehabilitation process.

Mr Abhisit urged the Bangkok governor to speed up talks to reduce the skytrain fare as the move has been stalled by a lack of government cooperation.

Regarding the Democrats' election strategy, the former premier said the party has rolled out a national blueprint, calling for integrated administrative platforms from the local to the national level.

The link between the central and local administration, including Bangkok governor and mayors, must be established to ensure policy harmonisation, he said.

Integrated administrative work was needed at all levels, he added.