Confrontations between the red- and yellow-shirt groups are likely to intensify after yesterday's clash outside the Crime Suppression Division (CSD) left scores of people from both sides injured. 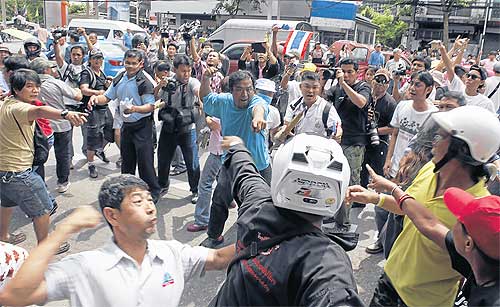 Yellow- and red-shirt supporters throw objects at each other and trade blows in a clash outside the Crime Suppression Division office on Phahon Yothin Road. The yellow shirts turned up to support a woman summoned for questioning over the alleged harassment of red-shirt activist Darunee Kritbunyalai. SURAPOL PROMSAKA NA SAKOLNAKORN

The clash erupted around noon during a stand-off between red shirts and yellow shirts who had gathered outside the CSD.

The yellow shirts, led by Suwat Apaipak, a lawyer for the People's Alliance for Democracy, turned up to show support for Manasnant Nookham, 31, a former teacher who last month publicly accused key red-shirt supporter Darunee Kritbunyalai of defaming the monarchy.

Ms Darunee filed a defamation charge with the CSD against Ms Manasnant, who was summoned for questioning yesterday.

Red shirts also turned up to show support for Ms Darunee, and both sides waved placards and banners, traded insults and threw water bottles at each other despite the presence of a police riot squad which was called in to maintain order.

Tensions escalated about 11am when a group of yellow shirts smashed the windshield of a truck belonging to red-shirt radio station FM90.25.

A yellow-shirt member, Chatchai Sutheesopon, 48, who was accused of carrying a hand gun by the red shirts, also suffered a head injury after he was hit in the back of the head during the scuffle. Police who searched him later found no weapons on him.

Payap Pankate, a United Front for Democracy against Dictatorship (UDD) co-leader and a Pheu Thai Party list-MP, said the violent stand-off is a sign that the government's reconciliation policy remains off-track.

He anticipates tensions will increase because lawsuits involving red shirts and security forces are now under way.

"The government's efforts to bring about reconciliation won't materialise easily. I think there will be attempts to escalate confrontation," he said.

He said red shirts would have to exercise restraint so that they do not play into the hands of the other side.

UDD chairwoman Tida Tawornseth, however, said yesterday that the situation would not spiral out of control. The UDD has urged red shirts to toe the line and act within the law.

Democrat secretary-general Chalermchai Sri-on yesterday called on the government to hold talks with red shirts over the incident.

He said more violent clashes could break out if no action is taken to address yesterday's incident.

"It is not enough for the government to say how badly it wants to bring about reconciliation. The government or the UDD leaders need to talk to the red shirts," he said.

Mr Suwat yesterday met CSD deputy chief Pol Col Prasopchok Prommoon to inquire about the defamation case. Mr Suwat said he did not think the allegations against Ms Manasnant had grounds and that the CSD should not take the case. "It looks to me like they had a quarrel and the case doesn't warrant CSD involvement," he said.

Members of both sides who were involved in the violence were later detained inside the CSD compound while the rest of the rival groups continued to camp out in areas on each side of Phahon Yothin Road from where they hurled verbal abuse at each other.

The ugly confrontation carried on for about two hours before supporters of Ms Manasnant began to retreat to nearby department stores, seeing they were outnumbered by red shirts whose numbers grew with new arrivals.

The stand-off ended about 3pm after the area around the CSD compound along with most of Bangkok was hit by heavy downpours.

Pol Col Prasopchok yesterday promised justice for both Ms Manasnant and Ms Darunee, saying Ms Manasnant could file a counter-charge against Ms Darunee if she wanted to.

He said the CSD has decided to postpone the questioning of Ms Manasnant until Oct 29.

Neither Ms Manasnant nor Ms Darunee showed up at the CSD headquarters yesterday.