Mr Yongyuth made a sacrifice to prevent any possible negative impact from the Alpine land case on the government, Ms Yingluck said at a news conference held at Suvarnabhumi Airport on her return from the United States.

Mr Yongyuth, who went to greet the prime minister at the airport, also attended the news conference.

Ms Yingluck said she was sorry to have lost such a capable minister. 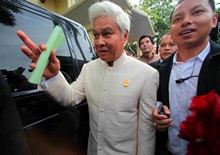 Mr Yongyuth prepares to announce his resignation on Friday after attending a ritual at Wat Sa Ket to ward off bad luck. CHANAT KATANYU

However, she said she had no plans for cabinet changes at this time because the deputy interior minister can help handle the work of the ministry.

"The government wants time to work for the people and that there will be no cabinet reshuffle for the moment," she said.

Mr Yongyuth's resignation will take effect on Monday. He remains leader of the Pheu Thai Party and a list MP.

Mr Yongyuth, 70, had been under pressure to quit the cabinet since the National Anti-Corruption Commission (NACC) found him guilty of malfeasance in the Alpine land case while he was a deputy permanent secretary for the Interior Ministry in 2002.

He had approved the sale of plots of land in Pathum Thani to Alpine Real Estate and Alpine Golf and Sports Club in 2002 despite a Council of State ruling that it was monastic land and could not be sold or transferred.

The ministry's civil service committee on Sept 14 expelled Mr Yongyuth with the order retroactive to Sept 30, 2002. However, it claimed the expulsion was also retroactively overruled by the 2007 Exoneration Act.

The opposition Democrats said the attempt to invoke the exoneration law was a desperate attempt to keep the minister in his seat, and reports persisted that Mr Yongyuth was pressed to step down by Thaksin himself.

If and when a cabinet reshuffle does take place, reports suggest there are three candidates for the deputy premier's job: former interior ministers Pokin Polakul and Chidchai Wannasathit, and Pol Gen Priewpan Damapong, who has just retired as national police chief.

Sopeculation continues in any case about a cabinet reshuffle that may take place in October or November.

Those close to Thaksin are considering two options -- appointing two individuals to fill both vacant seats (Interior and Deputy PM) or having a current minister double as a deputy premier and selecting a new interior minister.

One source said former deputy interior minister Sermsak Pongpanit has emerged as a candidate for the interior post.

However, he said it had nothing to do with setting an example for other politicians. "The issue is about differences in opinions. He decided to quit to avoid complications. That's courage."