A warrant for the arrest of former prime minister Thaksin Shinawatra has been issued by the Supreme Court's Criminal Division for Holders of Political Positions. 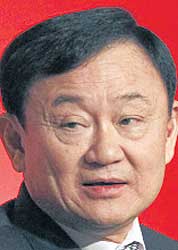 The warrant, issued on Wednesday, is connected to a case involving 11.58 billion baht in loans from state-owned Krung Thai Bank.

The Office of the Attorney-General (OAG) filed malfeasance charges against Thaksin and 26 others, including the former KTB president Viroj Nualkair.

The case involves a batch of KTB loans provided to the affiliates of Krisdamahanakorn Plc, a major property and real estate firm.

According to the charges, KTB approved large loans to the firm's affiliates, despite Krisdamahanakorn being classified as a non-performing debtor of the bank.

All of the defendants, except Thaksin, appeared before the court and denied the charges.

The court issued a warrant for Thaksin's arrest, and temporarily shelved the suit against him. The lawsuit can be renewed when Thaksin is brought to the court, a judge said.

The court set Jan 25 of next year for the examination of evidence.

Noppadon Pattama, Thaksin's legal adviser, yesterday said his boss had never had any involvement in the KTB's approving of loans to Krisdamahanakorn Plc.

Police have suspected a case of illegal surrogacy after a Chinese woman was arrested while trying to leave the country with a baby and a fake birth certificate on Wednesday, according to the Immigration Bureau.