United Front for Democracy against Dictatorship (UDD) co-leader Jatuporn Prompan wants the Department of Special Investigation (DSI) to inspect video footage of an army unit in Bangkok which he claimed might give some clues about the so-called "men in black". 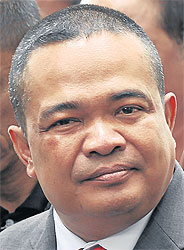 He made the statement as he arrived at the DSI yesterday to testify about the deadly 2010 clashes between security forces and red-shirt protesters.

He said he wanted the DSI to review video footage from security cameras at the entrance of the 11th Infantry Regiment in Bang Khen that recorded the comings and goings of vehicles.

Mr Jatuporn claimed he received information that someone wearing black was seen entering the regiment in a passenger van owned by the police.

The regiment served as the headquarters of the Centre for the Resolution of the Emergency Situation (CRES) during the 2010 political violence.

Mr Jatuporn also urged the DSI to summon two soldiers who he believes could be key witnesses in the case.

He said one soldier was responsible for drawing up the anti-monarchy chart _ a one-page document with names of 45 people allegedly involved in a movement against the royal family.

The CRES distributed the document to the media on April 26, 2010 before the dispersal of the red-shirt protesters on May 19 that year.

The other soldier was asked to collect and keep all the orders issued by the CRES, Mr Jatuporn said. He said he does not hold a grudge against the soldiers, as they only followed the CRES's orders, but he wanted those who issued the orders to be punished.

Mr Jatuporn said the issue of the men in black could be manipulated by the CRES to justify its crackdown.

He said the photos of the men in black were released three days after the dispersal of the red-shirt protesters on May 19, which was curious timing.

Meanwhile, Somwang Assarasi, a UDD core leader, handed a letter to the DSI yesterday asking it to raise the reward for information about the men in black by an additional 1 million baht _ money that will be paid by the red shirt group.

The men in black are thought to have killed protesters and soldiers during the 2010 political strife.

- The case of Maj Gen Khattiya Sawatdiphol, who was shot to death near Silom subway station;

- The case of Col Romklao Thuwatham and four other soldiers who were killed by shrapnel from a grenade which exploded on Dinso Road in Phra Nakhon district;

- The case of Japanese reporter Hiroyuki Muramoto, who was shot dead near Kok Wua intersection;

- The case of Italian photographer Fabio Polenghi, who was killed by a gunshot on Ratchadamri Road in the Lumpini area;

- The case of Mst Sgt Withaya Phromsamli, killed by a grenade that injured six other soldiers outside the U Chu Liang Building on Rama IV Road;

- The case of Pvt Narongrit Sara, who was shot dead near the National Memorial in the Don Muang area.