Reading of bill eyed for next House session

The Pheu Thai Party secretary-general says the new executive board will make a fresh bid to write a new constitution soon, and gather public support to ensure success. 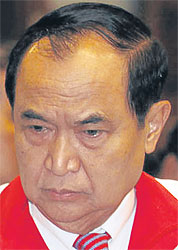 Pheu Thai Party secretary-general Phumtham Wechayachai said yesterday the ruling party's leadership was restructured especially to expand membership, a strategy that will support their attempt to change the charter.

Mr Phumtham said Pheu Thai will try to persuade the public to accept the reasons behind the constitutional changes.

Chusak Sirinil, a legal adviser to Pheu Thai, said yesterday the coalition parties' working group on constitutional amendments will decide soon whether to proceed with the third reading of the bill to amend Section 291 of the constitution. Mr Chusak is a member of the working group.

He said the government plans to change Section 291 to pave the way for the formation of a constitution drafting assembly with the authority to write a new charter.

The process to amend Section 291 was halted on July 13, after political opponents asked the Constitution Court to rule whether the proposed changes to Section 291 were part of a plan to overthrow the constitutional monarchy. At that point, the Pheu Thai-led government backed off its plan to submit the bill to parliament for a third reading.

Mr Chusak said the Constitution Court's ruling did not prohibit the third reading of the Section 291 amendment bill, adding that the court ruled that the amendment to Section 291 does not threaten the constitutional monarchy.

Mr Chusak wants the third reading of the Section 291 amendment bill to proceed in the next parliamentary session, and hopes it will lead to the formation of a constitution-drafting assembly. He has yet to convince the representatives of other coalition parties in the working group, however.

Mr Chusak suggested the working group could propose amendments to any sections of the present constitution right away and that a public referendum should be held after the new charter draft is completed.

Opponents fear Pheu Thai is trying to change the constitution to give immunity to its de facto leader, former prime minister Thaksin Shinawatra, who is on the run from a two-year prison sentence for abuse of power when he was prime minister.

In a special assembly yesterday, Pheu Thai MPs and party leaders elected a new executive board. The election followed the recent resignation of Yongyuth Wichaidit as party leader.

He was the sole nominee, and obtained 332 votes out of a possible total of 334. Two ballots were declared invalid.

Pheu Thai Party leader Jarupong said that as party leader and interior minister, he would have MPs and provincial governors cooperate with one another.