Voters in Illinois, the home state of President Barack Obama, have elected the first person of Thai origin to the US Congress. 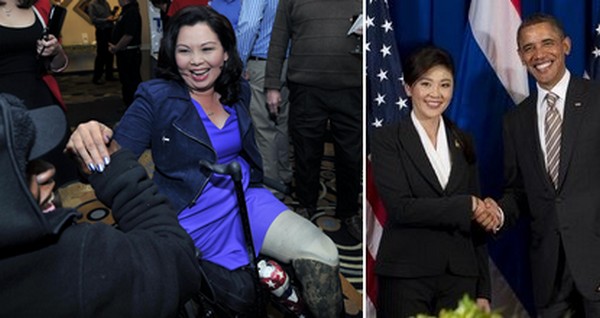 Bangkok-born Ladda Tammy Duckworth got props from Illinois state voters after her victory, and PM Yingluck Shinawatra fired off congratulations to President Barack Obama on his re-election.

Ladda Tammy Duckworth, an Iraq war veteran born in Thailand, defeated a conservative lawmaker from the Tea Party in a closely watched election for the lower House of Representatives in Schaumburg, a district near Chicago.

Prime Minister Yingluck Shinawatra has congratulated US President Barack Obama on winning a second term - and Ms Ladda for her achievement.

Ms Ladda, who lost most of both of her legs in Iraq, defeated first-term Republican congressman Joe Walsh who raised hackles by saying during his campaign that abortion was never necessary to save the life of a pregnant woman.

"I feel fantastic," said Ms Ladda, who was defeated in her first attempt to win a seat in Congress in 2010. Ms Ladda, more popularly known as Tammy, is a member of Mr Obama's Democratic Party.

She will officially assume her new position as a US member of Congress on Jan 3.

Born in Bangkok, the 41-year-old war veteran is the daughter of Frank Duckworth, a marine turned diplomat, and Lamai Sompornpairin.

She joined the US military while in graduate school at George Washington University.

Ms Ladda lost both her legs on Nov 12, 2004 when a rocket-propelled grenade hit the UH-60 Black Hawk helicopter she was co-piloting.

She managed to help land it before passing out from blood loss.

In an interview with the Bangkok Post in 2006, Ms Ladda said she "neither planned to be a military officer nor a politician, although my father's family members have all served in the military".

She dreamed as a young girl of becoming an ambassador. "Diplomacy is an important tool," she said.

The helicopter crash changed her attitude to life. "Life is not about acquiring more conveniences for yourself or to worry about small things that you might not have or achieve," she said.

"My aim is to do things that really matter to other people's lives, to honour my comrades every day for saving my life. They thought I was dead on the spot but they still carried me along and here I am."

Ms Ladda served as director of the state of Illinois Department of Veterans Affairs before she ran for Congress. She has called for more women and military officers in the House of Representatives and the Senate.

"Cooperation between Thailand and the US will continue at various levels," she said.

The US ambassador to Thailand Kristie Kenney said the relationship between the US and Thailand would remain strong.

"Both Mr Obama and Mr [Mitt] Romney would want a good relationship with Thailand, as Thailand is one of America's oldest friends in Asia," Ms Kenney said.

Viboonpong Poonpasit, an academic from the faculty of political science at Thammasat University, said negotiations of a free trade agreement with the US might suffer after Mr Obama's victory.