Pitak Siam protests are intended to cause an abrupt change in the country's government, said the group's spokesman AM Vachara Riddhagni. 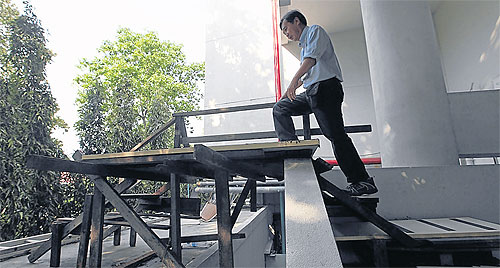 A staff member at parliament tests the strength of a make-shift ‘‘emergency exit’’ for MPs, senators and staff. The specially-built ladder is part of security preparations for a possible confrontation between rival groups who may hold a mass rally during the censure debate on Nov 25-27. PATTARACHAI PEECHAPANICH

However, he said the group did not want to bring about the change through a coup. Instead, Pitak Siam wants the government to give up power.

AM Vachara said the group's rally on Nov 24 at the Royal Plaza will not be protracted and will not move to other locations from there.

The group does not plan to lay siege at any state buildings, he said.

"These are things that [Pitak Siam leader] Gen Boonlert Kaewprasit insists on as the group's policy," he said.

AM Vachara claimed Pitak Siam now has about 500,000 registered supporters.

Army Commander Prayuth Chan-ocha yesterday called on army officers to not join the anti-government rally being held by Pitak Siam.

Gen Prayuth said military officers serve the state and must act with discipline and in accordance with supervisors' orders.

"Soldiers are state officials and as long as we have a government and a constitution we must act with discipline," he said.

Gen Prayuth said some soldiers may secretly join the rally but they would face disciplinary action if they are discovered.

National Security Council chief Paradorn Pattanathabutr said a large number of people will join the rally but the number is unlikely to exceed 50,000.

"The government won't do anything to challenge them," he said, adding there have been no reports that any protesters intend to provoke violence.

He said state authorities will not prohibit people from taking part in the rally but they need to keep their eyes open.

"I'm not threatened," Mr Charupong said. "I'm not worried. But I am taking precautions."

Meanwhile, the government will be asked to invoke the Internal Security Act for the duration of the Nov 24 protest at the Royal Plaza, which will be Pitak Siam's second mass rally.

National police chief Adul Saengsingkaew said there were reports that a group of people had contributed a total of 6 billion baht to a fund to be used to oust Yingluck Shinawatra's government.

He said this report corroborated information in a Special Branch Police intelligence report.

The same group also supports the anti-government rallygoers, he said.

Police expect that most rally participants will come from other provinces.

Pol Gen Adul said police will maintain direct contact with the organisers of the rally to monitor their moves and adjust to the situation as it develops.

Security will be tight at all government buildings in the area, he said.

He said the planned deployment of about 50,000 police during the rally would be subject to change.

He said his men will follow standard operating procedures in handling any violence that might arise during the protest, he said.

Special escape ladders will be in place along parliament's walls for use if there is an emergency there during the censure debate in the days after the rally, he said.

The censure debate is scheduled for Nov 25-27.