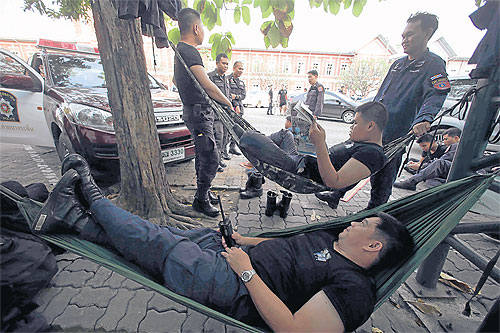 Crowd control police officers rest in hammocks in the compound of Government House. They have been assigned to deal with tomorrow’s Pitak Siam rally. CHANAT KATANYU

Appearing on the TV pool in the evening, Ms Yingluck said intelligence reports indicated that the rally was aiming at toppling the democratically elected government in violation of the constitution.

She said the reports indicated that the protesters would use violence, storm government buildings and instigate public disturbances to achieve their objective.

The prime minister said the government is duty-bound to maintain law and order and to protect the lives and properties of its citizens.

Ms Yingluck said that normal security mechanisms were inadequate to deal with such a threat. The cabinet has therefore decided to invoke the ISA in Phra Nakhon, Pomprap Sattruphai and Dusit districts of Bangkok, effective from yesterday until Nov 30.

The decision to invoke the ISA was made at a special cabinet meeting of ministers assigned to handle tomorrow's anti-government demonstration by the Pitak Siam group, led by Gen Boonlert Kaewprasit. The cabinet meeting followed a meeting of the National Security Council (NSC) which proposed the invocation of the ISA.

NSC secretary-general Lt Gen Paradon Pattanathaboot said security assessments suggested the rally is likely to turn violent, so proposing the invocation of the ISA was a preventive measure.

Deputy Prime Minister Chalerm Yubamrung yesterday chaired a meeting of the Internal Security Operations Command (Isoc) to set up the Centre for the Administration of Peace and Order, which will monitor and coordinate security responses to the rally.

National police chief Adul Saengsingkaew has been appointed to lead the centre, with members from 24 security agencies from the police force, military and government also present.

Pol Gen Adul said he will today explain the details of security operations during the rally. He said the invocation of the ISA is intended to ensure the safety of the rally's participants and to protect government buildings.

Pol Gen Adul said there had been reports that protesters might attempt to take the prime minister hostage and seize government offices.

Some of the 50,000 security officers called in from across the country to maintain order in Bangkok during the rally arrived yesterday in the capital and began camping out in the car park of Dusit Zoo, which is immediately opposite parliament house.

Despite saying he was confident everything would remain under control, House Speaker Somsak Kiatsuranont said maximum security measures have been put in place at parliament.

The officers were being transported to the capital in a convoy of vans, and were accompanied by 180 vehicles which can be used to detain suspects.

A source from the Pitak Siam group said the government is attempting to discredit the rally by accusing the group of plotting to subvert democracy.

Sunthorn Rakrong, coordinator of the Network of People in 16 Southern Provinces, expected at least 100,000 people to arrive in Bangkok for the rally.

He said the imposition of the ISA means that the government is now afraid of the demonstrators.

Mr Sunthorn added that the protesters are unfazed by government measures to block them from attending the rally.Sihasak Phuangketkeow, permanent secretary for foreign affairs, yesterday held a meeting with foreign diplomats and representatives of international organisations to explain the reasons for invoking the ISA.

He said the imposition of the act is not meant to restrict the right to assembly, which is guaranteed by the constitution. The government has invoked the law to maintain order during the rally, he said.

Meanwhile, Sayan Rungpasak, director of the Education Area 3 Office, which oversees schools in the three districts put under the ISA, said he had told directors of schools in the area to monitor the rally closely. 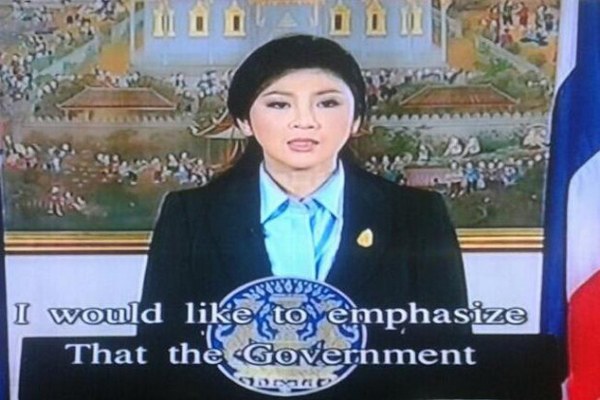 Prime Minister Yingluck Shinawatra spoke to the nation and defended the decision to invoke the Internal Security Act in the face of what she said was a threat of violence.