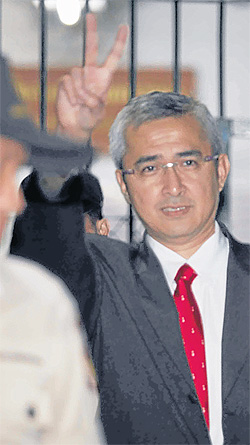 It is not yet known if Mr Korkaew will lose his MP status.

Mr Korkaew is one of six United Front for Democracy against Dictatorship (UDD) leaders who have been charged with terrorism. All were earlier released on bail.

The six are among 24 defendants charged with terrorism in connection with the UDD protests in 2010.

He said that Mr Korkaew had threatened the Constitution Court by saying that if the judges ruled to suspend their deliberation on the charter amendment bills, the red shirts would come out and fight "an eye for an eye".

He had also allegedly tried to intimidate the charter court judges.

The Criminal Court yesterday ordered him to be detained at Laksi temporary prison.

The court, however, added more conditions to their bail, banning them from speaking or taking part in political demonstrations and from leaving the country.

Mr Nipit conceded that Mr Korkaew's MP status likely remains intact even though he was jailed following the bail revocation.

This is because the Pheu Thai Party recently amended its regulation which had stipulated that party MPs who are sent to jail without being granted bail have their membership terminated automatically.

Under the new regulation, however, this clause was annulled, Mr Nipit said.

Now, so long as his party membership is retained, MP status would also be maintained, he said.

But Komsan Phokhong, a law lecturer at Sukhothai Thammathirat Open University and a former charter drafter, said Mr Korkaew was still likely to lose his MP status after the court revoked his bail.

He said without the charter court ruling clearly on Mr Korkaew's MP status, after parliament reconvenes on Dec 21 the Criminal Court may have to release Mr Korkaew temporarily since he has parliamentary immunity.

Winyat Chartmontri, a lawyer for the UDD, said he believed the Democrat MPs will petition the charter court to consider the issue.

Mr Winyat admitted that there has been concern over whether Mr Korkaew would be stripped of his MP status.

"Mr Korkaew knows this and may have to accept whatever happens," Mr Winyat said.

However, he said Pheu Thai will fight the case to the end.

Karom Pholthaklang, another UDD lawyer, said that attorneys can re-submit a request for bail for Mr Korkaew, although they may well have to explain the matter to the public first.

Mr Karom said the terrorism case against Mr Korkaew has yet to be concluded as the Criminal Court has not begun witness hearings.

Jade Donavanik, a law academic from Siam University, believed the UDD lawyers would again request bail for Mr Korkaew, but the court may not grant it.

He said the gathering is aimed at sending a warning to those plotting to subvert democracy.

Mr Jatuporn said the rally by the Pitak Siam group on Nov 24 showed that the ammart (elite groups) are still bent on overthrowing the Pheu Thai government.

He claimed that after Dec 10, the ammart will launch an even more vigorous campaign to try and topple the current Yingluck Shinawatra administration.

Mr Jatuporn also said the UDD should not hold activities on Dec 10, which is Constitution Day.