Sea of yellow greets His Majesty

Well-wishers camp out for glimpse of the King

Hundreds of thousands of people converged on the Royal Plaza, in front of the Ananata Samaklhom Throne Hall, on Wednesday to view His Majesty the King's grand audience, celebrating his 85th birthday. 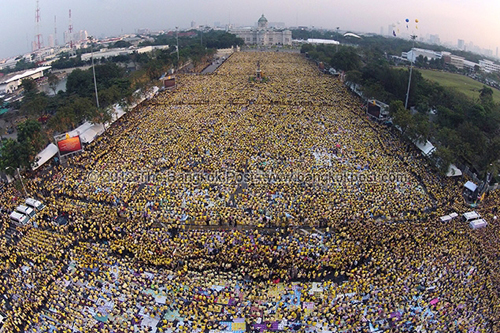 Aerial view of the Royal Plaza in the morning of Wednesday, Dec 5, as hundreds of thousands of well-wishers, in a river of yellow, await the Grand Audience by HM the King. Photo by Sithikorn Wongwudthianun.

In 2006, his loyal subjects turned the Royal Plaza and the length of Ratchadamnoen Avenue into a sea of yellow for the royal grand audience to mark the 60th anniversary of the King's accession to the throne.

Today marks the first time since June 9, 2006 that the King will to make an appearance before a grand audience at the window of the Ananta Samakhom Throne Hall.

Last year the monarch appeared on the main Mukkhadej balcony at the Chakri Maha Prasat Throne Hall at the Grand Palace to mark his 84th birthday.

Hundreds of well-wishers from around the country yesterday camped out in front of the Ananta Samakhom Throne Hall hoping to catch a glimpse of the King during the royal grand audience today.

They occupied spaces they believed would offer the best vantage point for when the King appears on the Throne Hall's south balcony at 10.30am.

Her Majesty the Queen will not accompany the King for the grand audience at the Throne Hall on the advice of her doctors.

The Queen will remain at Siriraj Hospital, according to a statement issued by the Royal Household Bureau which also provided an update on the Queen's health.

The Queen's condition has improved steadily and she has successfully been undergoing physical therapy, the statement said. However, the Queen has not yet fully recovered.

Her team of doctors has suggested the Queen refrain from attending public functions for the time being to avoid straining her health and disrupting her overall recovery.

Security arrangements have been finalised ahead of today's event, with about 3,000 police to be deployed to direct traffic flows and ensure security in and around the areas near the Throne Hall.

Areas around the Royal Plaza were closed to traffic at 6pm yesterday.

Narong Sahamethapat, permanent secretary for public health, said more than 500 doctors, nurses and medical personnel and more than 80 ambulances from 28 state and private hospitals will be on hand to look after people who attend the event.

Pol Maj Gen Worasak Nopsitthiporn, deputy chief of the Metropolitan Police Bureau, said the King's royal motorcade will cruise at 30kph so that well-wishers lining the streets can get a good glimpse of the monarch.

Pornphacharapromn Boon-in, 57, and his wife embarked from their hometown in Sukhothai in a car on Monday. During their 400km trip they slept in the car before arriving at the Royal Plaza yesterday.

"Last year, we came to the Royal Plaza on Dec 5 but missed a chance to glimpse the King because there was a massive number of people. So, we decided to come sooner this year to get a good view," he said.

The couple camped on the street last night as a throng of people joined them.

"Staying overnight on the street is a small thing compared to what the King has done for the Thai people," Mr Pornphacharapromn said.

Aree Mook-on, 64, arrived at the Throne Hall on Monday morning by taking a free train from Kanchanaburi with two friends, aged 71 and 70.

Even though Ms Aree suffers from knee problems and requires a walking stick, she willingly laid down a plastic mat on a sidewalk near the Throne Hall and prepared to spend the night there.

After witnessing the royal grand audience, the three women from Kanchanaburi plan to move on to Sanam Luang to light candles to salute the monarch and wish him good health.

"I would like this occasion to serve as a good reason to restore peace among Thai people.

"It is time for Thais to love each other," Ms Aree said.

Meanwhile, Wibun Sa-nguanpong, permanent secretary for the interior, said yesterday he had signed a new letter on Monday advising provincial governors nationwide to arrange fireworks displays at their own discretion to celebrate the King's birthday today.

The new order does not ban the use of the fireworks, Mr Wibun said.

Previously, he signed a letter on Oct 30 asking provincial governors to hold celebrations to bless the King in a manner that follows the style of activities in Bangkok, and to refrain from letting off fireworks.

He said confusion over the fireworks was a misunderstanding. "They can let off fireworks to celebrate the King's birthday like in previous years," Mr Wibun said.

However, the committee planning celebrations for the King's birthday at Sanam Luang in Bangkok has agreed to display decorative lights rather than set off fireworks at the event, which will be presided over by Prime Minister Yingluck Shinawatra. 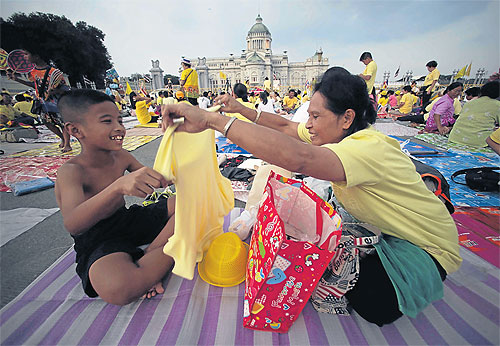 A mother and son from Nonthaburi province prepare to spend the night at the Royal Plaza. They are among hundreds of people who arrived at the compound yesterday to make sure they get the best view of His Majesty the King during the grand audience today. CHANAT KATANYU