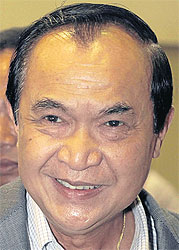 The parties believed the rewrite of the constitution would bring about a fair and democratic charter, Mr Charupong said.

Mr Sansak said the current constitution should be amended because it was a product of the 2006 military coup.

He cited several points that he said were in need of serious alteration, such as the party dissolution penalty that applies to an entire party even if only a single party executive is at fault.

Mr Chumpol said the coalition parties did not discuss the next move toward constitutional amendment yesterday.

He said they would meet again when every party has finished studying details of the results of the government panel's study of the possible repercussions of rewriting the charter.

Varathep Ratanakorn, who served as a secretary on the panel, said copies of the report would be delivered to every coalition partner by 2.30pm today.

The coalition parties will meet again later this week to allow the leader of each party to make clear their stance on the panel's proposals, he said.

Bhumjaithai deputy secretary-general Supachai Jaisamut, however, said he wanted all sides _ those who support the charter amendment and those who disagree with it _ to avoid a new political conflict.

Although his party agreed that the charter would have to be amended sooner or later, it would recommend that the political situation be taken into consideration when deciding on the next move, he said.

Meanwhile, hundreds of red shirts rallied yesterday to urge the government to proceed with the vote on the third reading of the charter change bill.

The rally started at the Democracy Monument in the morning with a parade of red shirts' vehicles moving to Government House to hand a letter to Prime Minister Yingluck Shinawatra.

Rally leader Pol Lt Col Waipot Arpornrat said the government must handle the vote on the third reading of the charter amendment bill as an urgent matter.

"We voted for the current government because we wanted constitutional amendment," he said.