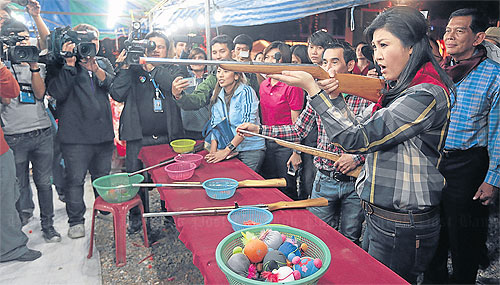 Prime Minister Yingluck Shinawatra aims an air rifle at a target at a fair organised for Pheu Thai Party members at a resort in Khao Yai, Nakhon Ratchasima, yesterday evening. Earlier in the day, the party held its seminar at another venue in the province. The meeting was dominated by an intense debate on charter amendment. PATTANAPONG HIRUNARD

The source said the ruling party assessed the situation,estimated it would not win the amendment battle, and decided it had better take a step back.

The party will proceed when it had a mandate from the public, who will first be told how they would benefit from the charter change.

The party leaders' views were expressed at a Pheu Thai seminar in Khao Yai, during which members fiercely debated how to proceed with the charter amendment.

No consensus was reached after the meeting, which was chaired by Prime Minister Yingluck Shinawatra.

The source said the core leaders' decision to delay the charter amendment bid would frustrate red-shirt leaders facing serious charges in connection with the 2010 political violence.

"Thaksin is aware that if he persists, the government will fall apart," said the source, referring to former prime minister Thaksin Shinawatra, de facto leader of Pheu Thai and Ms Yingluck's elder brother.

He said a snare had been laid for those trying to amend the charter, making the amendment process difficult.

Mr Charupong, also the interior minister, said the 2007 constitution was undemocratic. He said it was designed to weaken the checks-and-balances system, boost the power of independent agencies and undermine political parties, while it failed to engage the public.

It also proved to be an obstacle to international cooperation, he said.

"The charter and the referendum law have laid a trap for attempts to amend the charter," he said.

"The 2007 charter is the heart of the conflict and poses a threat to stability and national administration."

He said amending the charter section by section would not be easy either.

"Try to change how the members of independent organisations are selected and you can see trouble coming. It's not going to be easy," he said.

Ms Yingluck Sunday told the Pheu Thai members to "think positive" as the government would continue to sort out differences.

She said it would take great efforts to address issues, some of which were "structural problems".

"We will need to take a step back and talk it out to find the causes [of the problems], but not to create more divisiveness. Otherwise [the problems] will never come to an end," she said.

A heated debate ensued after the forum was opened for participants to express their views. Red-shirt members in the party strongly criticised a working group's proposal to commission legal experts at leading national universities to study how the government should proceed with the charter change.

Leading the attack were former MP Adisorn Piangket, list-MP Weng Tochirakarn and Chatuporn Prompan, who insisted that the party push ahead with the vote on the third and final reading of a constitutional amendment bill, now pending in parliament.

"Parliament needs to perform its duty. As lawmakers, you should quit if you are afraid to do your job," Mr Adisorn said.

Mr Chatuporn said the government should save the 2 billion baht it planned to spend to organise a public referendum on the constitutional amendment by sending two questions to the Constitutional Court instead.

"Ask the court whether it has actually ordered the referendum be held before the third reading vote, and whether it prohibits parliament to take the final vote on the amendment draft. These two simple questions cost 1 billion baht each. We could save the money if the court answers them," he said.

Meanwhile, a former charter writer commented Sunday that wholesale charter amendment is prohibited and a referendum to decide if it should proceed is probably unconstitutional.

Speaking at a forum on the political situation in 2013, Sqn Ldr Prasong Soonsiri said a provision is in place to prevent the abolition of the 2007 constitution.

Any amendments must be carried out section by section, he said.

"Section 165 says a referendum on issues deemed against the constitution is not allowed," Sqn Ldr Prasong said.

"So I am warning here that a proposed referendum could be unconstitutional."

Sqn Ldr Prasong chaired a committee tasked with drafting the 2007 charter, which followed the coup the previous year which ousted Thaksin.

Sqn Ldr Prasong, a staunch Thaksin critic, believes Section 309 is at the heart of the constitution amendment effort.

The section endorses the investigation into alleged corruption cases against Thaksin and his government by the coup-appointed Asset Scrutiny Committee and protects the 2006 coup-makers from prosecution.

He said an amnesty law was likely to be pushed when the amendment to Section 309 succeeded. He warned that the government's alleged abuses of power risked renewed political violence.

He said the country was heading to what he termed a "tom yum poo" crisis, brought on by populist policies such as the 300-baht minimum daily wage.

A Move Forward Party list-MP has called on all lawmakers to back a bill outlawing torture and forced disappearances, saying the proposed law would help raise human rights standards in the country.

'Lenient treatment' for US delegation

Activist Srisuwan Janya is calling on the National Anti-Corruption Commission (NACC) to investigate the Centre for Covid-19 Situation Administration (CCSA) over its preferential treatment of a high-profile US delegation which will arrive in Thailand on Thursday.

Australia locks down millions as US struggles to contain virus

SYDNEY - Australia on Tuesday ordered millions of people locked down in its second-biggest city to combat a surge in coronavirus cases, as nations across the planet scrambled to stop the rampaging pandemic.