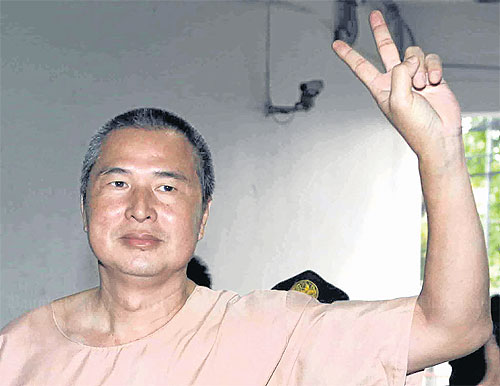 Somyot Prueksakasemsuk, former editor of the Voice of Taksin magazine, flashes a V sign before the verdict in his case at the Criminal Court yesterday. SURAPOL PROMSAKA NA SAKOLNAKORN

Rights advocates have denounced the verdict as a major setback for freedom of expression in the country.

The Criminal Court yesterday sentenced Mr Somyot to five years for each of the two charges against him.

He was accused of violating Section 112 of the Criminal Code, also known as the lese majeste law, by publishing two articles in 2010 that were deemed insulting to the royal family.

The court also cancelled the suspension of a previous one-year-jail term imposed on Mr Somyot from a defamation case, raising his sentence to 11 years in prison in total.

His lawyer Karom Polpornklang said he will appeal against the ruling and seek bail.

Mr Somyot's case has attracted the international spotlight as human rights organisations worldwide view it as a violation of free speech and have called for his immediate release.

The courtroom was packed with about 200 observers including diplomats and members of civil society and media.

They were joined by several red shirts who are critical of the way the lese majeste law has been applied.

The articles were written by former PM's Office Minister Jakrapob Penkair under the pseudonym of Jit Polachan and were published in the February and March 2010 editions of the Voice of Taksin magazine.

The four-judge panel said readers would easily understand the articles referred to the King.

The information contained in the article, however, was incorrect and libellous and it was Mr Somyot's duty to vet it, the court said.

Before the court's decision was delivered, Mr Somyot said he hoped he would be able to go back to his family in peace after decades of working for other people.

''After some rest, I will continue to work for the basic rights of all types of detainees, particularly on issues of bail,'' Mr Somyot said. He was himself denied bail 12 times.

The court said Mr Somyot was given a one-year suspended jail term in 2009 but he had again committed the crime of defamation by threatening and insulting the monarchy, so his previous prison term was added to the 10-year sentence.

HRW and Amnesty said the conviction would further chill freedom of expression.

''The courts seem to have adopted the role of chief protector of the monarchy at the expense of the right of free expression,'' Brad Adams, Asia director at Human Rights Watch, said.

Amnesty's Asia-Pacific deputy director Isabelle Arradon urged authorities to release Somyot and all other prisoners of conscience without conditions.

The European Union delegation to Thailand said it was deeply concerned by the court's decision.