The government yesterday averted a protracted protest by a red shirt-affiliated group by agreeing to consider an amnesty for political offenders. 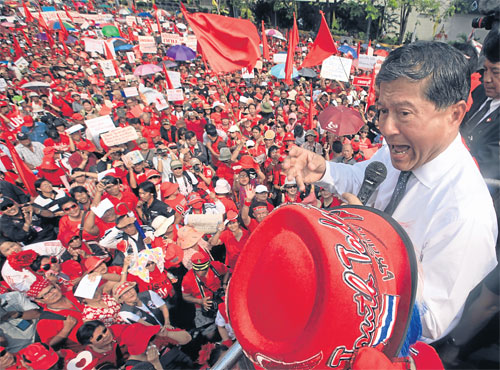 The "January 29 for the Release of Political Prisoners" group, led by Chulalongkorn University lecturer Suda Rankupan, gathered at the Royal Plaza from late morning Tuesday to urge the government to consider an amnesty proposal by the Nitirat group.

Nitirat, comprising legal academics, have proposed including an amnesty for political offenders in the government's constitutional amendment drive.

The January 29 group gave the government until 6pm on Tuesday to comply, otherwise it would immediately march to Government House to stage a protest.

Deputy Prime Minister Chalerm Yubamrung addressed the group about noon but they refused to leave.

Thawat Boonfueng, deputy secretary-general for the prime minister, was then sent to speak to the group at 6.30pm.

Although the deadline had passed, the January 29 gathering was still at the Royal Plaza.

Pol Maj Gen Thawat told them that Prime Minister Yingluck Shinawatra had agreed to forward Nitirat's proposal to the Council of State for consideration.

The proposal would then be referred back to the cabinet for further submission to parliament.

"We ask you to understand that the Council of State will take some time vetting the bill. It can't be done within 24 hours," Pol Maj Gen Thawat said.

"I believe the prime minister will push for its enforcement as soon as possible. She doesn't abandon those who are in prison."

The group was satisfied with this and dispersed about 8pm.

No trouble was reported at the gathering and no police were deployed.

Ms Suda said yesterday the group agreed to hold its fire on the protest and would give the government time.

She expected Nitirat's proposal to be submitted to parliament before the current sessions ends in late April.

Nitirat's proposed amnesty would reach back to the September 2006 coup that ousted Ms Yingluck's brother Thaksin Shinawatra. It would cover all political offences committed since then.

The group, previously named the Declaration Outside the Court, has been campaigning for the release of political prisoners of all colours.

Mr Chalerm said an amnesty for political offenders should be granted by a law, not by an executive decree which could be stalled if the Constitution Court was asked to intervene.

The red-shirt United Front for Democracy against Dictatorship (UDD) was seeking an amnesty by an executive decree for its members who had been convicted or held on charges related to political activities.

Deputy Commerce Minister Nattawut Saikuar, a UDD leader, distanced Ms Suda's campaign from his group's one. He said the UDD preferred an executive decree because it would take less time, and national reconciliation was a priority.

However, he noted that both proposals for amnesty were aimed at the same goal of freedom for political prisoners.

"When a conflict remains unresolved, any government would come under pressure," he said. "But I don't think their campaign is a form of confrontation."

An independent committee on promotion of the rule of law, chaired by former parliament president Ukrit Mongkolnavin, has also pitched an amnesty proposal.

Ms Yingluck said yesterday the government would take all amnesty proposals into consideration, but could not immediately answer the January 29 group.

"We accept [all proposals] at this stage but we can't give any answers yet," Ms Yingluck said. "We will forward the proposals to the Council of State and other agencies for a study.

"Moreover, these proposals will have to undergo the legislature's review."

All bills proposed to the government would be sent to the Council of State for review, she said.

Opposition leader Abhisit Vejjajiva said yesterday his Democrat Party would support an amnesty for those prosecuted under the emergency law as long as it did not cover criminal or corruption offences.

He especially did not want former prime minister Thaksin to be granted an amnesty for his 2008 abuse of power conviction.

Mr Abhisit said the opposition was ready to discuss the amnesty proposals with the government.

"Reconciliation is being stalled because of Thaksin," he said. "His interests get in the way, and if the government persists [with trying to clear his name], conflicts will widen."