Thailand has regained relative calm and stability over the past year. After the worst floods in half a century subsided in early 2012, on the back of political crisis and turmoil that date back to 2005, Prime Minister Yingluck Shinawatra's government has some breathing space to roll out its consumption-driven "populist" policy agenda. 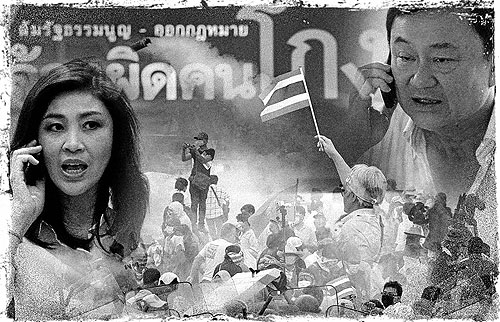 However, the street protests against the Yingluck government have not gone away. In October-November last year, a royalist-conservative movement called Pitak Siam, which opposed Ms Yingluck's brother Thaksin Shinawatra, mobilised and turned up more than 10,000 demonstrators at its peak. But the anti-Thaksin movement could not produce broad-based support as in 2005-06 and 2008, when it was instrumental in overturning Thaksin-backed governments.

After all that has been said and seen in recent years, Thai politics has reached a plateau, characterised by an uneasy accommodation on one hand and a protracted stalemate on the other.

What warrants attention in the year ahead and beyond is how much Thailand can still manage to move forward despite the daunting questions the country faces and the overarching endgame surrounding the royal succession.

Considering he won the last election in July 2011 by a decisive majority (265 of 500 MPs), Thaksin has played his cards with uncharacteristic patience. He and his team have learned from their past mistakes. In February 2008, he returned to Bangkok after a similar election victory two months earlier. His presence destabilised politics and paved the way for protests and judicial manoeuvres that doomed his proxy government.

Thaksin had to leave again a few months later, and has not returned since. His party won the election and took the reins of power only to lose it within one year through extra-parliamentary demonstrations and unprecedented judicial activism.

This time it appears different. Thaksin broadly rules Thailand from abroad with the help of technology while his sister runs the government at home in person, surrounded by his team and policy ideas. From cabinet line-ups and key appointments at state-owned enterprises to Pheu Thai and red-shirt strategies, Thaksin gives the nod above all others.

In addition to staying in exile, Thaksin and his team also have not pressed the constitutional game. His Pheu Thai Party, which campaigned on amending the military-backed 2007 constitution, has been timid and tentative after winning power. With Pheu Thai's more than half of the 500 MPs in the lower house and close to half of the 150-member half-appointed, half-elected senate in support, the Yingluck government has the bicameral majority to revise the constitution as it sees fit. Yet when the government's charter change was challenged by the Constitution Court last July, Pheu Thai threw in the towel without a fight. The Court ruled that it had jurisdiction over the legislative work on the charter and suggested that a referendum be held to gauge public opinion on amendments.

To defuse the judiciary-legislature tension, the government put charter change on the backburner by setting up committees and assigning legal experts and academics to study the pros and cons of ways forward.

Charter change is delayed indefinitely, and may well pass on to the next elected government. As with Thaksin's biding of his time, charter change is not being pressed because it could derail the Yingluck government. Even with the constitutional rules written to keep him and his ilk out of office, Thaksin and his team's repeated election victories obviate the urgency of constitutional amendment. Why change the rules when one keeps winning the game!

While corruption is synonymous with the Thaksin brand, Ms Yingluck's graft scandals have been manageable. Although corruption permeates Thai officialdom and society, at issue is whether it is damaging enough to discredit and corrode government legitimacy to the point of ouster by a military seizure of power (1991 and 2006), popular pressure (1992 and 1997) and parliamentary censures (1995 and 1996).

Ms Yingluck came without much baggage as a fresh face from running a Shinawatra firm as CEO to running Thailand as elected politician. She has been heckled and ridiculed for her fashion taste, dismal English, poor Thai and even an alleged sex tryst. But corruption accusations against her personally have made little headway.

Unsurprisingly, her cabinet ministers have faced several accusations of graft, including flood-prevention expenditure and collusion and cronyism over the government's rice-pledging scheme, but none of these has stuck enough to harm Ms Yingluck's legitimacy. With her clear of corruption and her cabinet's graft manageable, Ms Yingluck has covered the traditionally-weakest flank of elected Thai governments.

The final part of this implicit bargain is that the monarchy must be protected and upheld at all costs. His Majesty the King, 85, has been on the throne for 66 years, presiding over Thailand's contemporary modernisation through the Cold War when the strong and symbiotic roles of the monarchy and military were essential in keeping communism at bay.

In recent years, the quintessential Thai tension is rooted in the twin transitions of the times and the individual. Electoral democracy in the early 21st century has outgrown the monarchy-centred hierarchical political order from the Cold War. The chasm between democracy- and monarchy-centred outcomes has manifested in crisis and turmoil.

To stay in office, Ms Yingluck, her brother and their team must let these two transitions take their own course without rushing or subverting them. It is the Thais' extended goodbye to their past, not to be interrupted by dissenting voices. This is why the anti-Thaksin government of former prime minister Abhisit Vejjajiva cracked down harshly in 2009-11 on offences against the monarchy, invoking Section 112 of the Criminal Code known as the lese majeste law, and the Computer Crimes law.

For her part, Ms Yingluck has done little to protect freedom of expression because her and her brother's deal means the monarchy is to remain sacrosanct. What happens in the future is anyone's guess, perhaps confined to the Thais' Buddhist fatalism and collective contrivance to get out of clear and present dangers as in the past. This is the quiet pillar of the calm and stability which we are seeing. The government must pay due reverence and go with the flow on all monarchy-related matters.

On the other side of this bargain rest many in Bangkok's established centres of power who detest Thaksin to their bones for his overweening ego, abuse of power and corruption. Most of all, they cannot stand him for being the upstart from outside the established order who changed the way Thailand used to be by stirring the bottom of the pot and waking up a hitherto detached electorate. Now the masses of citizens are no longer passive loyal subjects as they keep going to the polls whenever they can and demanding their votes to be counted in government formation and policy formulation.

Anti-Thaksin fatigue seems to have set in. Plenty of people in Bangkok hate Thaksin but they cannot find enough traction and gumption to kick his government out yet again through a military coup or another judicial dissolution. Too much is at stake. Too many international eyes are watching. Too many domestic voices would rise up. The only way for Thaksin's opponents to retake power in the longer term is to work on poll prospects, requiring a complete revamp of the opposition Democrat Party, a task too far for most of them at this time.

In the interim, they have had to put up with Ms Yingluck at home in exchange for Mr Thaksin's self-imposed exile as long as the charter remains intact and the monarchy untouched. These arrangements are two sides of the Thai coin, stalemate on the one hand and accommodation on the other during the country's political transition.

This coin keeps Thaksin out, allows Ms Yingluck to stay put, entices establishment centres to stand down and enables Thailand to make forward movements after several years of political sclerosis. It is an unusual government in unusual times.