Payap Shinawatra, younger brother of fugitive former prime minister Thaksin, entered the monkhood at a Buddhist temple in India on Feb 10 and was promoted to the position of deputy provost in a week, reports said.

The reports said Mr Payap was ordained at Mahabodhi Temple in Bodhgaya, India, and was given the ordination name of Phra Payap Khemakuno. His stay will be brief and he plans to leave the monkhood on March 11.

Traditionally, a monk would have to spend at least 30 months in a temple to be eligible for such a promotion.

His sudden elevation to deputy provost has drawn criticism from many Thai netizens, who agreed Phra Payap Khemakuno is not qualified, or not suitable, for promotion.

Others replied that this is a matter for Buddhist monks to decide and people should not criticise them. 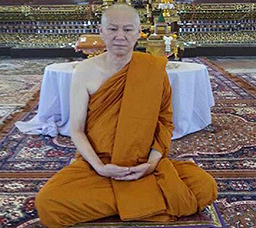 Payap Shinawatra has entered monkhood and is given the ordination name of Phra Payap Khemakuno. (Post Today photo)

An official at the National Office of Buddhism said Phra Payap Khemakuno's promotion was not appropriate because his qualifications must be considered first.

People do not know what the monk has done for Buddhism to warrant it, given that he has been ordained for less than a month.

"It's not surprising this has made people feel that a senior monk acted without considering the consequences.

"People might think that there is a hidden political agenda here, and worst of all this could affect Prime Minister Yingluck Shinawatra. Heer opponents might use this incident to attack her," the official said.

"People might also assume that monks are involved in colour-coded politics, but we'll have to wait for Somdet Phra Thirayanmuni's clarification of his decision to promote the monk first," the official added.

Phra Payom Kallayano of Suan Kaew Temple, a well-known monk, said there is nothing wrong with Phra Payap Khemakuno being promoted.

"This problem would not arise if Payap were not the brother of a man named Thaksin.

"We should stop thinking too much about the time factor, because there are men who have been monks for many years but have not done anything for the religion," Phra Payom said.

"I've read in the news that Phra Payap previously helped fund the construction of Buddhist temples. If this is true then he can be promoted," the abbot said.