KANCHANABURI - A woman was killed and 10 other people injured when a train hit a tourist van on a railway crossing in Sai Yok district on Monday afternoon.

The van, driven by Tossapon Kongprasoot, 28, crossed the track at a spot where there is no barrier or warning lights, in front of Yoko River Kwai Resort in tambon Soom Soom, just as a train carrying about 70 local and foreign passengers was approaching.

The van, carrying 10 passengers, failed to cross the track in time and the train hit the middle of the vehicle, police said.

All on board sustained immediate injuries, two of them serious. Some passengers' seats were ejected  through the van's rear door by the force of the impact.

A 40-year-old Thai woman identified as Boonpa Sutthirak, one of the two badly injured passengers, was later pronounced dead at a hospital.

They van was carrying people on a trip from Bangkok to Sai Yok district, home to several popular attractions including the Tiger Temple at Wat Pha Luang Ta Bua and the Hellfire Pass Memorial Museum.

The train was en route from Bangkok to Nam Tok Station in Sai Yok district. 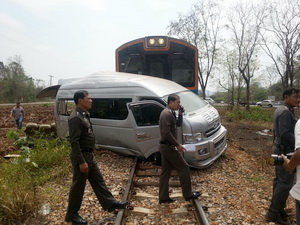 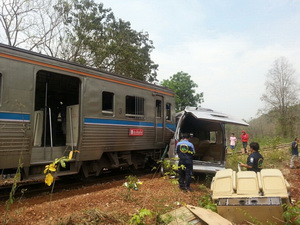 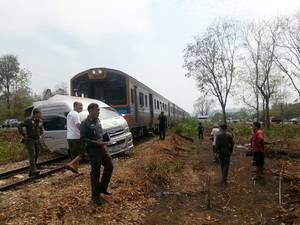