Army Commander Prayuth Chan-ocha and Democrat leader Abhisit Vejjajiva called Tuesday for the government to step out of the shadow of deposed prime minister Thaksin Shinawatra. 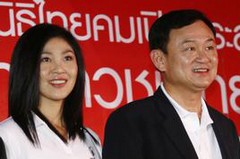 They were responding to news reports that the ex-premier had ordered the Pheu Thai-led administration to adamantly pursue its policies, particularly on amnesty and charter amendments.

Gen Prayuth said the government should instead listen to the public and make decisions based on the constitution and the law.

"We should listen to people who live here in the country and leave the person who stays overseas alone," he said.

Mr Abhisit said the more strings Thaksin tried to pull, the more conflicts he would generate.

"If the government is serious about reconciliation, it should stop thinking about its own interests. If Thaksin continues to pull strings, the country remains at risk [of conflicts]," he said.

Prime Minister Yingluck Tuesday denied Thaksin was pressuring the government to press for an amnesty.

"The public wants to see a solution. I sympathise with the people [facing prosecution for their part in political clashes] so I support any talks to find a solution," she said. The House had several amnesty bills to consider and would work out how to proceed.

The latest was an amnesty bill submitted to parliament last week which has the backing of 42 Pheu Thai MPs.

Pheu Thai MP and red-shirt leader Worachai Hema has said he would ask the House to speed up amnesty bill deliberations once this bill was included on the House agenda. Pheu Thai MP for Ubon Ratchathani Somkid Khongchua said Tuesday Thaksin had offered advice on how to handle the amnesty issue.

"So when Mr Worachai asks the House to move the bill forward, I will support it and I believe all 42 proponents will," Mr Somkid said.

He noted House speaker Somsak Kiartsuranont had asked for 7-10 days to examine the legitimacy of the bill before putting it on the House agenda.

"If we back down, it will be a wasted opportunity and we will lose support. I think the other side wants it too, but they just won't admit it," he said.

He said an amnesty bill should be passed as an act, not an executive decree, to keep the pressure off the government.

Mr Worachai said the amnesty was an urgent issue despite government chief whip Amnuay Khlangpha saying it would not be brought forward on the agenda. "I will ask the House to speed up deliberation. Senior party members don't oppose my move. Those who disagree have that right," he said.

He would need the support of at least 250 MPs to bring the bill forward for urgent consideration.

Meanwhile, Democrat Jurin Laksanavisit said the opposition had decided not to take part in Deputy House Speaker Charoen Chankomol's forum to discuss the amnesty bills because it did not see any merit in it.

The party was concerned the forum would be used as a rubber stamp for an amnesty bill.

He said the party would boycott the forum as long as there was no assurance it would not be used to justify an amnesty.

Bhumjaithai spokesman Supachai Jaisamut said an amnesty bill was not a priority issue.

"So far we don't see how it can lead to reconciliation. But it is hard to say if the party will support it or not. It depends on the people and the timing," he said.

House speaker Somsak said it was not within his capacity to withdraw the four reconciliation bills currently on the House agenda. He was responding to the Democrat leader's call for the withdrawal of the bills as a goodwill gesture before any talks on an amnesty proceed.

Thais have shown strong interest in the metaverse, while the virtual world could be a promising opportunity for the tourism, shopping and gaming fields, according to online research firm Toluna.

A budget of 36 billion baht has been approved by the cabinet for the phase-3 development of Don Mueang airport, the country's second-biggest gateway.