B2-trillion bill months away from passage

The Pheu Thai Party is in no hurry to get approval for its 2-trillion-baht borrowing bill, which could be four to five more months away from becoming law. 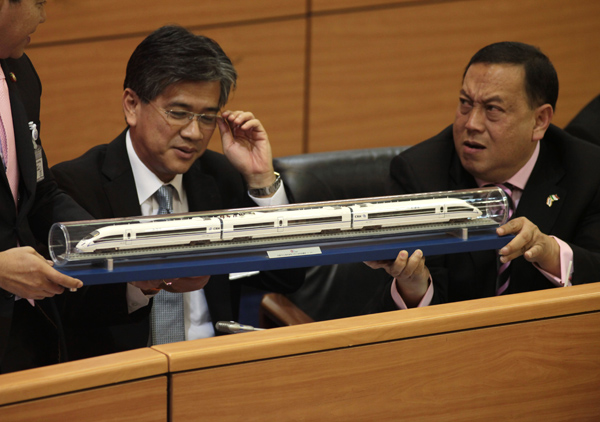 The second and third readings of the bill would be tabled for debate when the House reconvenes in August, Phitsanu Hattasongkhroh, a government deputy chief whip, said on Friday.

The House passed the bill shortly before 10pm on Friday by 284 to 152 votes. Twenty-one MPs abstained and another seven did not vote.

The House will open for a special session in late May with the budget bill for the 2014 fiscal year on the agenda. Some opposition lawmakers have speculated that the government would use the May session to insert the megaproject spending bill.

But Mr Phitsanu dismissed those fears, saying on Friday that the ruling party would go through the normal process to avoid being accused by the opposition of rushing to undertake megaprojects.

The next step is to set up a 36-member vetting committee before forwarding it to the lower house for the last two readings.

The bill is intended mainly to address the infrastructure shortcomings of Thailand, highlighted by the building of a high-speed train network from Bangkok to all regions.

The project was attacked by Democrat members who focused on attempts by Pheu Thai to favour voters in its stronghold in the northern region.

Samart Ratchapolsitte, a party-list MP, and Anchalee Wanich, a Phuket representative, claimed the government had a hidden agenda when it gave priority to a high-speed rail line to Chiang Mai instead of the route to Nong Khai.

The Nong Khai train would have more economic potential as it could connect with the line to southern China through Laos, Mr Samart said. He said the northern line may have been given priority because Chiang Mai is the prime minister's home province.

Transport Minister Chatchart Sithipan denied favouritism, retorting that the high-speed train would reach Nong Khai as well as Chiang Mai if Pheu Thai could return to administer the country after the next general election.