Prime Minister Yingluck Shinawatra on Saturday downplayed a red shirt protest outside the Constitution Court, saying those involved had the right to demonstrate as long as they did so within the law.

Her comment came amid criticism that the protesting red shirts, who have been camped outside the court since Monday, were intimidating the nine judges.

Their leaders reportedly urged red shirt supporters to "capture" the court's judges if they see them. The call, which has drawn widespread condemnation, was made in response to the court's move on Friday to file a complaint with Crime Suppression Division police against four of the leaders that they were defaming the judges and inciting unrest. 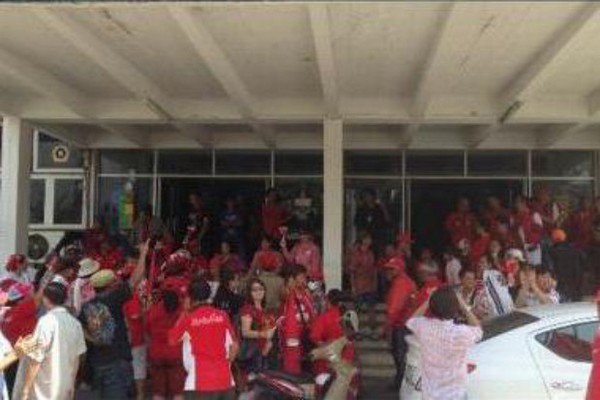 Red shirts gathered and protested at the Constitution Court all week, but have infamously been told by their leaders to "capture" the judges on sight. (Post Today photo)

The red shirts are demanding the judges step down after they had agreed to a review of whether the charter amendment bills were constitutional.

"Any protest activity that is in line with the law can proceed," Ms Yingluck said before leaving for a three day official visit to Mongolia.

Her comment ignores a call by Democrat party leader Abhisit Vejjajiva for her to instruct the red shirts to stop their protest against the court.

As the red shirts stepped up pressure on the court, the Pheu Thai Party was trying to make sure its parliamentarians toe the line when responding to the judge's order of April 3 for 312 senators and MPs who signed in support of the amendments to submit their explanations for doing so. It was in response to the petition of Senator Somchai Sawaengkarn who claims the planned amendments are unconstitutional.

Pheu Thai MP for Nakhon Phanom Paichit Sriworakhan said the party would hold a meeting on April 30 to press for a resolution to boycott the charter court's order.

The party says the court's move is tantamount to judicial intervention in the legislative branch.

Parliament Speaker Somsak Kiatsuranont and about 20 MPs are reportedly prepared to make a clarification to the court.

"We need to move in the same direction to prevent damage. I think the party MPs will eventually toe the line. And I believe Mr Somsak is being mature by obliging," said Mr Paichit.

Pheu Thai MP for Ubon Ratchathani Somkid Chueakong called for MPs who fail to comply with the party's decision to be punished.

"Mr Somsak is the leader of the legislative branch. He need not fear that his post will be affected if he doesn't respond to the court. What will be, will be," he said.

Pheu Thai has prepared an open letter to submit to the court that rejects its jurisdiction.

It will be presented to party MPs for discussion on April 30. The open letter is expected to be submitted to the charter court on May 2, said Pheu Thai deputy spokesman Anusorn Iamsa-ard.

He said the move is not intended to bring down the charter court, but to underline the principle of separation of powers.

"We are not pressuring the court or trying to undermine independent public agencies as the opposition has alleged. The letter is intended to maintain the balance of power," he said.

On Saturday, Meechai Ruchupan, a former president of the National Legislative Assembly, urged all MPs and senators to respect the charter court's authority.

On his website, Mr Meechai said the country would be in total chaos if agencies did not recognise the authority one another's authority.

"What if the court refuses to make a ruling based on a law? What if the public, the police and the prosecution don't comply with the law? What will be left of the country?" he said.

Democrat list-MP Ong-art Klampaibul yesterday called on the government to take a stance following the red shirts' threat against the charter court judges.

"It should demonstrate that it doesn't support an illegal rally before it is accused of being behind it and before the situation gets out of control," he said.