People have the right to criticise government policies, but if an accusation goes too far, it is the ICT Ministry's duty to take action, she said.

Such action is not intended to benefit her alone, she said. Rather, the principle to be upheld is that everyone must act within the boundaries of rights and freedoms, she said. 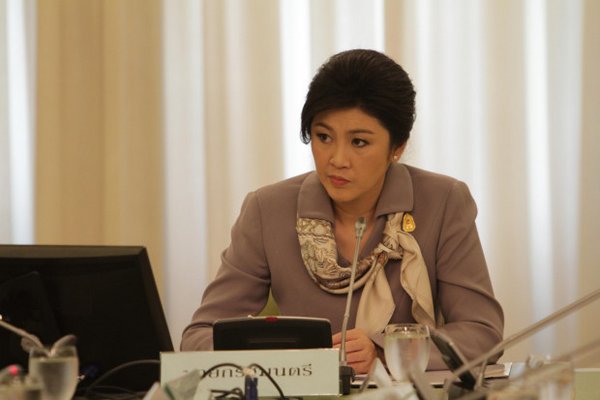 Eye on the internet: Prime Minister Yingluck Shinawatra appears to be watching the comments on her computer screen, as she tells the media Tuesday that she backs censorship by the ICT ministry of anyone who "goes too far" online.

Defending her controversial democracy speech in Mongolia, Ms Yingluck again said she had told the truth. The political incidents that have happened in Thailand should serve as a lesson, she said.

Ms Yingluck was referring to the military coup that ousted her brother, former premier Thaksin Shinawatra, from power in 2006.

"I insist that the truth is the truth. It is better to learn from the truth than to avoid it," she said.

ICT Minister Anudith Nakornthap gave his assurance Tuesday that his ministry will take action to protect not only the prime minister but others from unfair online criticism.

He also dismissed claims his ministry had been negligent in failing to close down websites that had insulted the royal institution. The authority to take such action rested with the Criminal Court, he said.

The Metropolitan Police Bureau (MPB) has appointed a team of officers to investigate Thai Rath cartoonist Somchai Katanyutanan, known by his pen name Chai Ratchawat, who is in legal hot water after allegedly calling the premier an "evil woman" on his Facebook page.

The MPB said it will soon summon him to give a statement.

Meanwhile, army chief Prayuth Chan-ocha defended the actions of troops during the red-shirt protests in 2010, which were indirectly mentioned by Ms Yingluck in her Mongolia speech.

Ms Yingluck said many innocent people were killed by snipers during the crackdown when she highlighted the deaths of the 91 people who were killed.

Gen Prayuth said it was up to the prime minister to say what she said since she was the country's leader. However, he insisted the army did not suppress the red shirts in 2010 but simply enforced the law.

"I would like to ask if there were soldiers killed at that time?" he said.

"Today, everything is under the justice system, let's not discredit one another."

Democrat list-MPs Kasit Piromya said his party was sending letters to embassies in Thailand and international organisations to "tell the truth" and counter Ms Yingluck's April 29 speech at the Conference of the Community of Democracies in Mongolia.

Mr Kasit said Ms Yingluck failed to mention at the forum the behaviour of her family, the Pheu Thai Party and the red-shirt demonstrators, or explain the presence of anti-government armed men during the political protests in 2010.

He demanded the prime minister apologise to the people for lying about the situation in Thailand.