The "biggest power outage ever" in Thailand blacked out 14 southern provinces Tuesday evening, plunging almost the entire South into blackness for lengthy periods.

The outage occurred about 7pm, and the lights reportedly started coming back on again in certain areas at 8pm. But most of the tourist areas of Phuket were reportedly still in complete darkness two hours after the blackout began, and authorities said some areas might not get power before Wednesday morning.

Some lights were seen at 8.30pm in some areas of Phuket, Surat Thani and Hat Yai city.

Sirichai Maingram, president of the Electricity Generating Authority of Thailand (Egat) Employees Union president, said the 500kV high-voltage cable in the central region was disconnected from the system.

Mr Sirichai said this was the biggest outage that ever occurred in the country.

The blackout was caused by a failure in the high voltage transmission power lines from the Central to the Southern region through Bang Saphan district of Prachuap Khiri Khan province, a spokesman of the Electricity Generating Authority of Thailand (Egat) said.

Egat Corporate Social Responsibility deputy governor and spokesperson Pongdit Pojana said all Egat power stations in the South were accelerating electricity output, including two diesel-powered plants in Surat Thani and Krabi, to make up for the lost energy to the grid. They accounted for 500 megawatts of a total demand of 2,500 in the region.

The technical cause of the blackout will be further examined, and officially announced later, he said.

Suthon Boonprasong, assistant governor to Egat’s Transmission System Operation, said as of 9.30pm electricity was already back to normal in 90% of the affected areas in the 14 provinces.

Namchai Lorwattanatrakul, governor of Provincial Electricity Authority, confirmed that a preliminary examination indicated the blackout first hit a 500-kilowatt power station at Bang Saphan district of Prachuap Khiri Khan, a major venue for distributing electricity to users in the southern provinces, and later caused widespread outage in other areas. 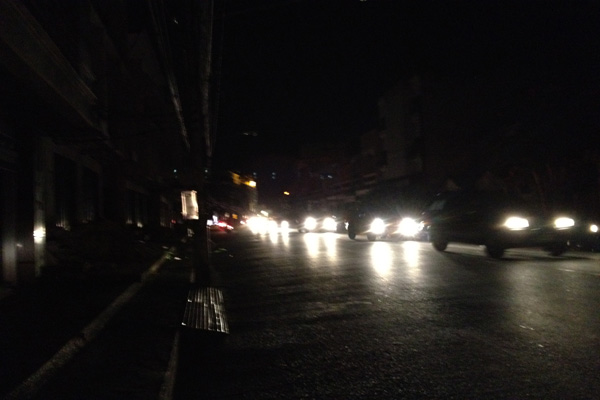 Motorists drive through the Nipat Songkroh 5 Road with street lights off in central Hat Yai of Songkhla, one of the 14 provinces hit by the country’s ever biggest outage. (Photo by Vichayant Boonchote) 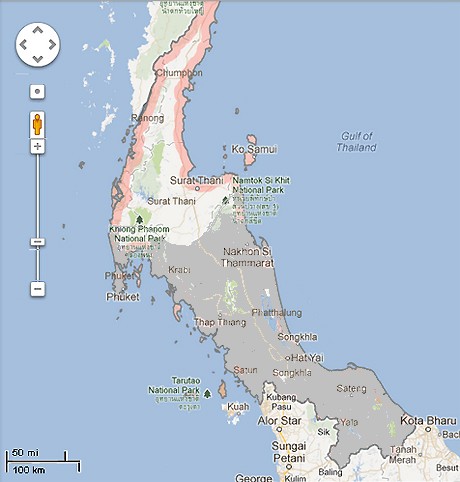