The reconciliation bill proposed by Deputy Prime Minister Chalerm Yubamrung has been placed on the House agenda for the next session in August, Deputy Speaker Charoen Chankomol said yesterday. 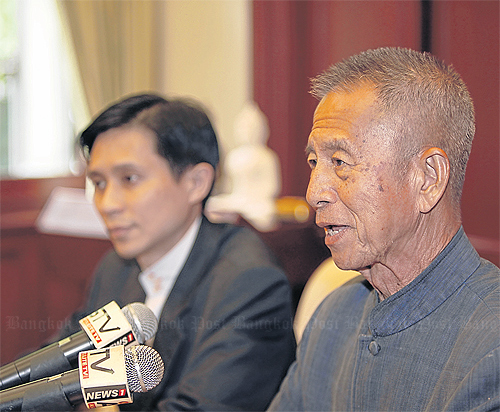 Chamlong Srimuang, a core leader of the People’s Alliance for Democracy (PAD), speaks to the media about the group’s move to oppose the government’s effort to rewrite the constitution. He is accompanied by PAD spokesman Parnthep Pourpongpan, left. APICHART JINAKUL

Mr Charoen said the draft legislation is not a financial bill, as claimed by the Democrat Party, because it had nothing to do with government spending or budget management.

Mr Charoen said the Democrat Party cannot seek a legal interpretation of the bill from the Council of State because the constitution authorises the parliament president to decide whether the bill concerns financial matters.

If the dispute persists at the scrutiny stage, however, the parliament president can call a meeting of the chairmen of the 35 House committees to settle the matter, Mr Charoen said.

He also said it was unlikely Mr Chalerm's bill could be merged with Samut Prakan MP Worachai Hema's amnesty bill, but this was a matter for the House to decide.

The amnesty proposed by Mr Worachai would exclude red-shirt protest leaders and those who ordered the use of force to quell their rally in 2010.

Meanwhile, the People's Alliance for Democracy (PAD) yesterday submitted a petition asking the Constitution Court to issue an injunction halting parliament's deliberation of a bill to amend Section 68 of the constitution.

The court should issue the injunction pending its own ruling on the legality of the move to amend the section, PAD spokesman Parnthep Pourpongpan said.

The decision to request the injunction was made at a meeting of core PAD members yesterday, Mr Parnthep said.

Senator Somchai Sawaengkarn earlier filed a petition with the court asking it to rule on the legality of the move to amend Section 68.

Mr Parnthep said the amendment would curtail people's right to file a petition directly with the Constitution Court against actions suspected of undermining the constitutional monarchy or grabbing power through unconstitutional means.

The amendment would require that any petition be first vetted by the Office of the Attorney-General.

The bill is awaiting its second reading in parliament.

The amendment to Section 68 could lead to the deliberation of another bill to amend Section 291, Mr Parnthep said.

That bill, currently awaiting its third House reading, has been stalled in parliament since the Constitution Court ruled that the charter could not be rewritten in its entirety without a referendum.

If Section 291 is amended, it could pave the way for a complete rewrite of the constitution, Mr Parnthep said.

The PAD also asked the charter court to order the 311 MPs and senators who supported the Section 68 amendment bill to withdraw it from parliament.