About 700 Guy Fawkes-masked demonstrators gathered in downtown Bangkok Sunday to launch a fresh campaign against what they called the regime of Thaksin Shinawatra. 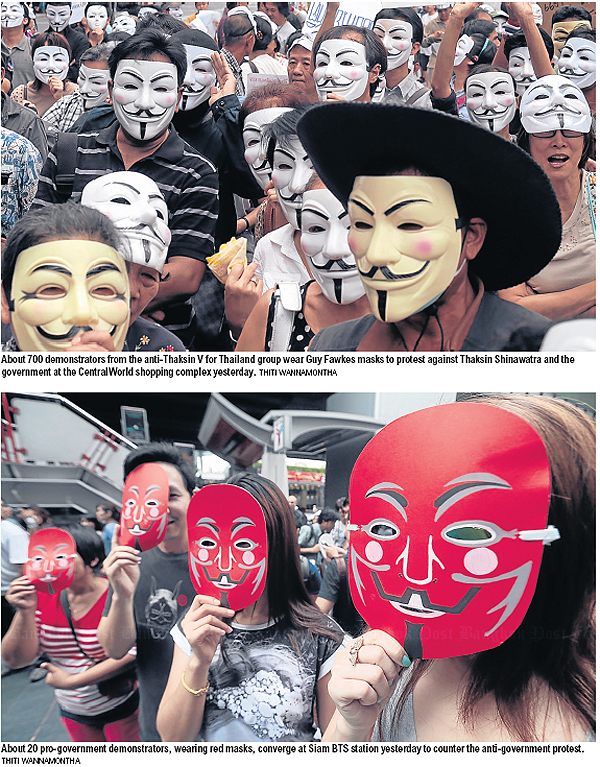 The group, calling itself V for Thailand, or the white mask movement, converged in front of the CentralWorld shopping mall around 1pm with placards and posters with messages attacking Thaksin and the government of his younger sister, Yingluck Shinawatra.

The group later marched to Siam Square shopping centre and ended their rally at the Bangkok Art and Culture Centre at Pathumwan intersection at 3pm.

Shortly after the white mask group dispersed, another group of red-masked pro-government demonstrators showed up at the Siam BTS station to counter the white-masked protesters.

The white mask protest grew from an anti-Thaksin Facebook campaign last week. People online used the image of Guy Fawkes to symbolise their campaign against ousted prime minister Thaksin, who they believe is pulling the strings of the Yingluck government.

Thousands of Facebook users swapped their Facebook profile pictures with images of Guy Fawkes, and flooded the Facebook pages of the Pheu Thai Party, Ms Yingluck, Thaksin and his son Panthongtae with critical messages.

The visage of Guy Fawkes has become popular among protesters after the 2005 Hollywood film V for Vendetta showed thousands of people marching on the British parliament wearing them.

Guy Fawkes was an early-17th century British figure who was executed following a foiled plot to assassinate King James I.

About 150 police were deployed to monitor the rally Sunday, which was held without any core leaders.

Pakorn Porncheewangkul, who led the red mask group, said they disagreed with the V for Thailand movement and wanted stability for the country.

The group dispersed about an hour later.

"These people have a clear agenda," Mr Noppadon said. "When the public did not support them, they just changed the names."

Pheu Thai spokesman Prompong Nopparit said the Guy Fawkes movement is being carried out at the same time as the anti-government "Thai Spring" online campaign, led by former senator Kaewsan Atibhodi, and the opposition Democrat Party's "Revealing the truth" mobile stage. He said groups that attempt to smear the Pheu Thai Party and Thaksin could face legal action.

Democrat leader Abhisit Vejjajiva said he was wary of the political confrontation between the two groups. The government should not encourage any movements to stir up conflicts, he said.

Suriyasai Katasila, coordinator of the Green Politics group, said the main political test will come when parliament reconvenes in August and the bills on reconciliation, amnesty and the 2-trillion-baht loan scheme are deliberated.