AYUTTHAYAA clever dog has been rewarded after carrying a plastic bag containing a newborn girl from a roadside rubbish dump back to its home. 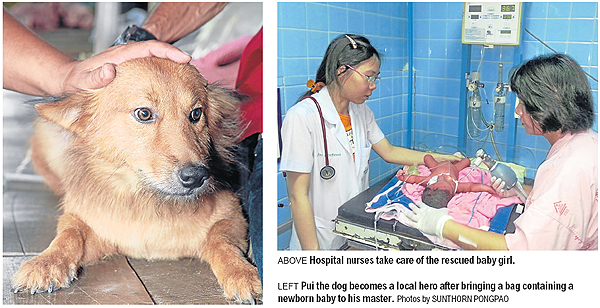 The male Thai Bangkaew dog named Pui took the white plastic bag from a dump site in tambon Sala Loi in Tha Rua district to his master Gumnerd Thongmak's house and barked loudly to get attention.

Mr Gumnerd's niece, Sudarat, 12, said she went downstairs after hearing Pui barking and found the bag on the patio.

She opened it and was shocked to find a newborn baby inside.

Sudarat ran to get her mother and they took the baby to Tha Rua Hospital.

She weighs 2.2kg, hospital officials said. They believed she was born prematurely, at around seven and a half months. She was later transferred to Phranakhon Sri Ayutthaya Hospital.

Pui yesterday received a leather collar and a medal from Tha Rua district Red Cross Chapter as a token of appreciation for his clever rescue.