PATTANI - A replica of a historic cannon that was recently installed in front of the Krue Se mosque in Pattani's Muang district has been damaged by a bomb, police said. 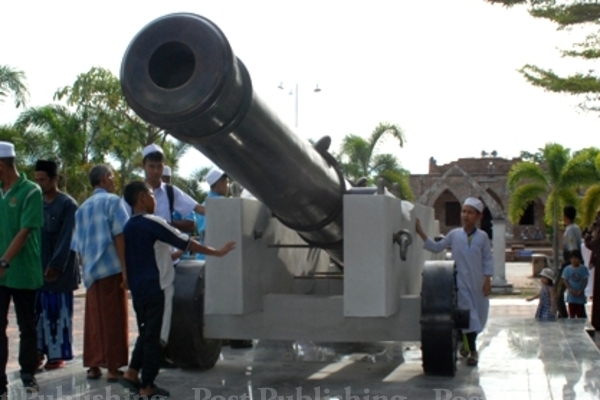 A replica of the Phaya Tani cannon is installed in the southern province of Pattani on June 2 before it was damaged by a bomb on Tuesday. (Photo by Isra News Centre)

No injuries were reported.

The replica was installed at the mosque on June 2 following repeated calls by Pattani residents for the return of the Phaya Tani cannon, which is recognised as part of the far South's heritage.

The cannon was removed from Pattani by Siam troops during a war between Siam and Pattani around 200 years ago.

The real Phaya Tani cannon is installed in front of the Defence Ministry in Bangkok.

The authorities refused to return the cannon to Pattani, but agreed to install a replica in its place.

The Fine Arts Department completed the replica recently and the authorities unveiled it on June 2 amid anger from some residents.