The Japanese government had announced it will exempt Thais from having to obtain visas for short stays as part of a programme to entice more tourists to visit the country. 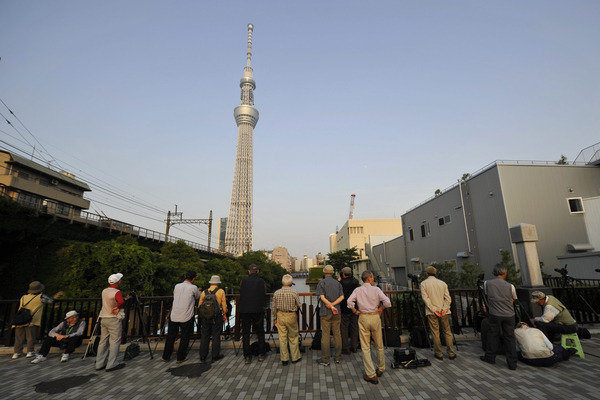 People take pictures of the 634-meter high Tokyo Skytree in downtown Tokyo. The new landmark atrracted more than 50 million people to its tower and shopping complex in its first year. (EPA photo)

The government of Prime Minister Shinzo Abe approved the new policy on Tuesday but has not announced when it will take effect, only saying that the measure could be introduced ahead of the summer season.

"The effective date of the implementation and the length of stay without visa will be announced soon," the Japanese embassy said on Tuesday.

The embassy advised Thai travellers to take heed of when the new rules come in, warning there will be no refunds for those visas issued before the waiver takes effect.

The embassy posted another statement on its website, saying that the government is working on the final touches for the implementation of the scheme, which could be launched this summer.

The summer season in Japan normally begins in June, according to travel website gojapan.about.com

The policy is intended to bolster ties between the two countries. "We hope that the exchanges between Japan and Thailand will be further promoted by this visa relaxation," the Japanese government said in a statement.

The Thai Travel Agents Association (TTAA) said it was confident that outbound tourism from Thailand to Japan will be boom this year.

Chumnong Tntharot, TTA vice president and managing director of Swadee Holiday Co, suggested the exemption would increase the sale of package tours to Japan at least 20-30% this year.

Japan is a popular destination for Thai tourists, ranking only behind Europe in popularity, he said, although more Thais visit China and South Korea because of they are cheaper.

After the exemption takes effect the average price of a package tour to Japan will likely decrease by 2,000 baht, he said.

The average cost of a package tour to Japan is currently 40,000-50,000 baht per head for five days and four nights.

About 300,000 tourists from Thailand were among eight million foreigners visiting Japan last year. During the first four months of this year, there were around 140,000 Thai touristing visited Japan.

Japan has issued multiple-entry visas for Thais since June last year. It charges 1,120 baht for a single entry visit visa and 2,240 baht for multiple visits.

The visa exemption, which will also be extended to Malaysia, is part of Japan's ambitious goal to see 10 million tourists visiting Japan this year and 30 million by 2020.

Wilawan Kosakarn, a businesswoman in Chanthaburi province, said the visa waiver will make it convenient for her to visit the country. She had planned to take a trip to Hokkaido soon, but has now postponed it until she can benefit from the visa change.

However, Ms Wilawan said, the waiver could cause problems for Thai tourists, similar to issues experienced by some Thais travelling to South Korea and were unexpectedly denied entry when they arrived.

Skiing in Hokkaido is another attraction for foreign tourists visiting Japan.