Government concerns are rising that the fast-growing white-mask movement, known as the V For Thailand group, could threaten the administration. 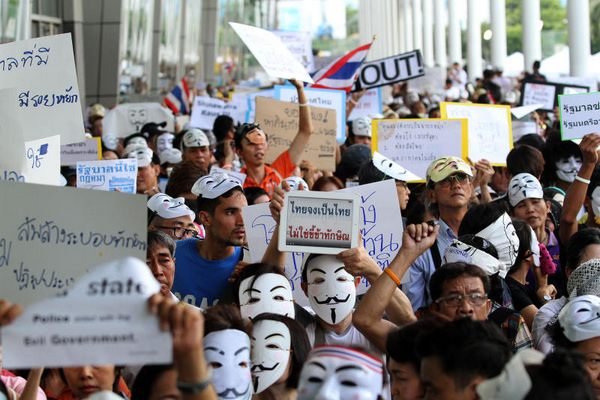 The government is growing increasingly concerned at protests like this one, which have jammed the pavements in the CentralWorld-Siam Square area. (File photo by Pattarapong Chatpattarasill)

Even though Deputy Prime Minister Chalerm Yubamrung insisted he was not worried about the white-mask protesters, dismissing them as only a handful of "familiar faces", he still admitted the number of protesters wearing Guy Fawkes masks has grown rapidly.

Mr Chalerm claimed the white masks have received support from "owners of liquor and poultry businesses, as well as major bankers".

He also suggested a major media figure whose name begins with "S" was behind the movement.

He told the Bangkok Post that he supports the group, believes it is doing the right thing, and is confident it will continue to grow.

He said his T-News agency has produced white masks to sell to protesters, who wear them as an anti-government symbol. More than 10,000 masks have been sold so far and orders are still coming in, he said.

The number of participants in the so-called online rallies _ a new form of protest against the government and deposed prime minister Thaksin Shinawatra through online social networks, such as Facebook _ has also risen from about 300 in the movement's initial stages to several thousand now.

"With the white-mask movement continuing to grow, Thaksin and his family must now ask themselves how they can continue to live in a place where people hate them, and for how long they can depend on protection from the red shirts," Mr Sonthiyan said.

The white-mask protesters mainly comprise middle-class Thais who do not otherwise belong to any colour-coded groups but share a common stance against what they believe is a corrupt government, he claimed.

Mr Chalerm on Monday accused the V For Thailand protesters of having links to people who run businesses on the "grey market".

He said the group was backed by some politicians and a number of people running illegal casinos and lotteries.

The deputy premier also claimed he had received a report from police on Sunday, which indicated the V for Thailand group was made up of seven different groups that had not yet merged because they could not agree on who should lead the movement.

Mr Chalerm insisted they would not be able to overthrow the government.

Former prime minister Somchai Wongsawat, who now chairs the Pheu Thai Party committee overseeing party strategies, has asked whether the group's rallies calling for the ouster of the government could be deemed as illegal, since the Pheu Thai-led government was democratically elected.

Suriyasai Katasila, coordinator of the anti-government Green Politics group, told the Bangkok Post the white-mask movement will become even more important in August, when parliament reconvenes, with charter amendment, amnesty and reconciliation bills awaiting deliberation by the House.

It remains to be seen if the white-mask group will stick to the same format of gatherings without any activities or raise the level of their protest, he said.

"I believe Thaksin is afraid of the white-mask group, which uses an international symbol to resist a government which was democratically elected but has behaved in a dictatorial manner," Mr Suriyasai said.

He believed the white-mask group was spurred by Prime Minister Yingluck Shinawatra's controversial speech on democracy in Mongolia in April.

The movement is still going strong despite Ms Yingluck claiming the protesters are made up of members of the old power clique who are trying to obstruct democracy, Mr Suriyasai said.

"The white-mask rallies are intended to strip the mask of spurious democracy from this government," he said.

The Joint Standing Committee on Commerce, Industry and Banking predicts that 7 million workers will be out of a job by June because of shutdowns from the pandemic.