It's hard to control poaching in Huai Kha Khaeng, but officials aren't ready to give up yet

At a vast 1.7 million rai of pristine forest, and with a complex ecological system, Huai Kha Khaeng sanctuary is a hugely difficult area to police. That means poaching of the reserve's bountiful wildlife is increasing, despite the best efforts of officials. 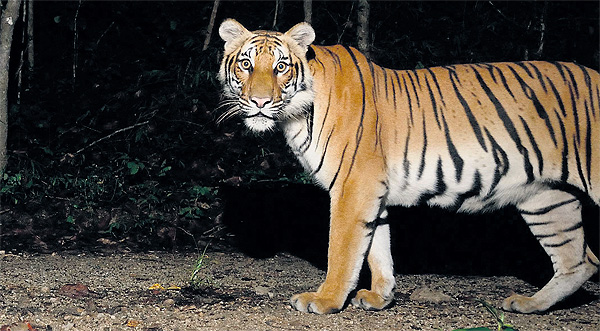 The forest, located in the lower northern province of Uthai Thani, is home to 67 of Thailand's 265 species of animals, including the only herd of wild water buffalo left in the country.

In 1990, Huai Kha Khaeng became the focal point of public attention when Seub Nakasathien, the head of the sanctuary at the time, committed suicide in his office. His untimely death, linked to despair and work-related stress, made society as well as decision makers realise the significance of the sanctuary and the hardship faced by those safeguarding it.

The following year after Seub's death, Huai Kha Khaeng was made a Unesco World Heritage Site.

Still, there is more work to be done to preserve the forest complex as the wildlife, Indochinese tigers especially, are under constant threat from poachers.

"However, there are still people trying to exploit it. Over the years, there's been an increase in the number of poachers, never a decrease."

The poachers, who mix in unnoticed with about 40,000 villagers in 64 villages surrounding the sanctuary, have no compunction about breaking the tough rules and regulations that were applied after Huai Kha Khaeng was listed as a world heritage site, he said.

While some advocates favour beefing up the laws for better protection of the sanctuary, Huai Kha Khaeng's chief Chatchawan Pisdamkham does not agree.

He said the current law is already adequate. "What is needed is better enforcement," he says.

In particular, he said his office has been trying to foster better relations with local administrative agencies and build true partnerships with the surrounding communities.

But the work is slow and complicated, with a myriad obstacles to overcome.

One factor that makes poaching difficult to combat is the high value of wildlife parts.

The World Bank estimates that the illegal international trade of wildlife on the black market around the world is worth an estimated US$10 billion (310 billion baht) a year. By selling one tiger skeleton, a poacher can make the equivalent salary of a labourer who works for 10 years.

More often than not, wildlife trading is connected with local influence.

"It's scary. We all work so hard to preserve this place ... We still find bullet shells lying about on the trails. We thought this kind of act had decreased in Thailand. However, we were wrong," conservationist Suksit Simchareon lamented.

In a bid to expedite conservation efforts, the Natural Resources Department has set up a "smart patrol protection" programme which recruits young men to work in sanctuary and conservation areas around Thailand.

Mr Chatchawan said in order to boost the work morale of these young patrollers, the department is trying to increase their pay from 7,000 baht a month, to 9,000 baht.

He hopes the increase in their standard of living will make the officers stay longer in the job and attract new generations to the cause.

In coming years, the sanctuary plans to increase the patrols and staff reinforcement to strengthen the conservation mission, he said.

Apart from trying to keep poachers at bay, the sanctuary has made stringent efforts in tiger conservation work.

Thanks to their work, Huai Kha Khaeng's tiger population has grown over the past 10 years.

"We are lucky enough to have adopted the practices early while there is still wildlife left," he said.

The goal for the future is to maintain and increase the wildlife population.

The main method for maintaining the tiger population is to research and catalogue the elusive animals.

Researchers use camera traps, which employ motion sensors that take multiple pictures at a time, to catch the animals in their natural habitat, then track their migration patterns.

Mr Somphot said sanctuary officials also use satellite tracking collars in tracing tigers. But the devices are prohibitively expensive at 200,000 baht apiece. The sanctuary has been able to afford collars for only 16 tigers.

Another problem is that the collars last only one year. After that, the holding clasp opens and the device falls off.

Since much of the state budget for conservation goes to salaries, Huai Kha Khaeng has to reach out to private donors to help fund the programme.

The main goal in saving tigers is to preserve biodiversity within the forest. Tigers are on top of the food chain. Their existence helps to control the number of herbivores in the ecosystem.

The predators need a habitat that contains enough water and prey animals. A fully-grown tiger needs around 6-7kg of food per day. Over the past century, tiger populations in many parts of the world have been decreasing drastically, affecting ecosystems.

Tigers are an indicator of a healthy forest ecology, Mr Somphot said, adding that failed conservation efforts could potentially lead to deforestation, which can result in natural disasters. A tiger and a leopard are spotted in Huai Kha Khaeng wildlife sanctuary. This year, True Corp organised a photo contest to boost public awareness of wildlife conservation to help curb poaching in this pristine forest. TRUE CORPORATIONS 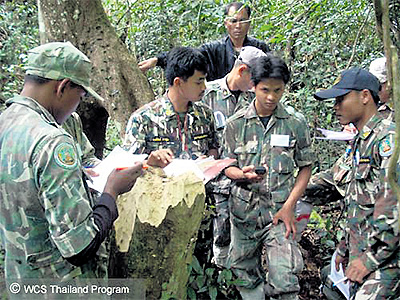 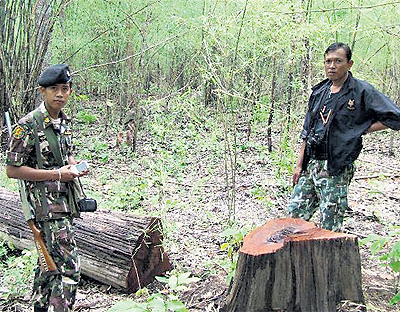