65% 'okay with corruption' if they gain
Thailand
Politics

65% 'okay with corruption' if they gain

Thai people's willingness to accept corruption remains disturbingly high despite the growing attention devoted to the issue, according to Abac Poll.

Sixty-five percent of respondents surveyed this week said government corruption was acceptable if they also benefited from such activity.

The result was little changed from a survey done in March, when 65.5% said corruption was acceptable. The figure has been 60% or higher ever since Abac Poll began asking the question in November 2011.

The pollsters from Assumption University conducted their latest survey between July 1 and 5 among 2,107 people aged 18 years and over in 17 provinces in Thailand. The poll result has a margin of error of plus or minus 7%. 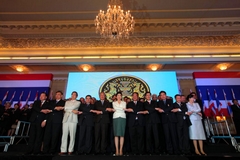 Prime Minister Yingluck Shinawatra and cabinet ministers take the stage at Government House to announce their intention to fight corruption at an event staged on Tuesday. (Photo: Chanat Katanyu)

When classified by gender, 67.7% of men and 60.5% of women were willing to accept the existence of corruption if the public benefited.

More than half of the respondents in all age ranges had the same attitude, with the highest acceptance level at 73% found among respondents aged between 30 and 39 years old.

By occupation, the group with the highest acceptance level was farmers and daily labourers at 78.9%, followed by students and university students at 73.3%, employees of private organisations (67.1%), housewives and retirees (63.5%), traders and entrepreneurs (62.8%), civil servants and employees of state enterprises (54.0%).

Poontharee Issarangkul na Ayutthaya, the assistant director of Abac Poll, said the results showed that a dangerous attitude still existed among the majority of people.

Because of such attitudes, she said, it could be difficult for the government to solve corruption problems plaguing its rice-pledging programme because farmers and workers and civil servants accept the practice.

The public's acknowledgement that there was corruption by those who should be preventing it also made it more difficult to eradicate the problem, she added.

Abac Poll believes that to change unhealthy attitudes, a more truly democratic system is needed. This would involve allowing households and other stakeholders to evaluate government agencies at all levels such as police, public hospitals and schools, as well as officials in district offices or local administration organisations.

The evaluation results would then be used for budget allocations and the appointment of civil servants.

Ms Poontharee said the government should create true transparency in the auditing system for the administration of the state budget, so detailed information could be disclosed on how the money is spent.

A report by the University of the Thai Chamber of Commerce earlier this year indicated that graft accounted for about 30-35% of the cost of state procurement projects. That worked out to more than 300 billion baht or up to 2.5% of gross domestic product, it said.

The government must also protect people who disclose corruption, instead of setting up a committee to intimidate whistleblowers, she added.

She was referring to the heavy pressure on Supa Piyajitti, the deputy permanent secretary at the Finance Ministry, who has made allegations of widespread corruption in the rice programme.

Ms Poontharee said all people should start being more honest in order to implant positive attitudes in the next generation, as it is worrying that young people also find corruption acceptable.

A report by the University of the Thai Chamber of Commerce earlier this year indicated that graft accounted for about 30-35% of the cost of state procurement projects. That worked out to more than 300 billion baht or up to 2.5% of gross domestic product, it said.

Key economic ministers on Saturday vowed to weed out corruption on the radio and television broadcasts of the prime minister's weekly talk programme.

Commerce Minister Niwatthamrong Bunsongphaisan said his priority was to plug loopholes that create room for graft a chance in ministerial policies.

Tackling the problem would be tantamount to getting rid of the excess fat, leaving the economy with strong muscles, he added.