Democrat Party leader Abhisit Vejjajiva warned on Sunday of a bid to use a legal avenue to clear all obstacles for the return of former prime minister Thaksin Shinawatra, saying the move could lead to "civil war".

The opposition leader also demanded proof of the identities of two people whose voices are heard in an audio clip.

The clip, posted on YouTube on Saturday, was said to be a conversation between Thaksin and Deputy Defence Minister Yuthasak Sasiprapa in Singapore late last month. (Story continues below) 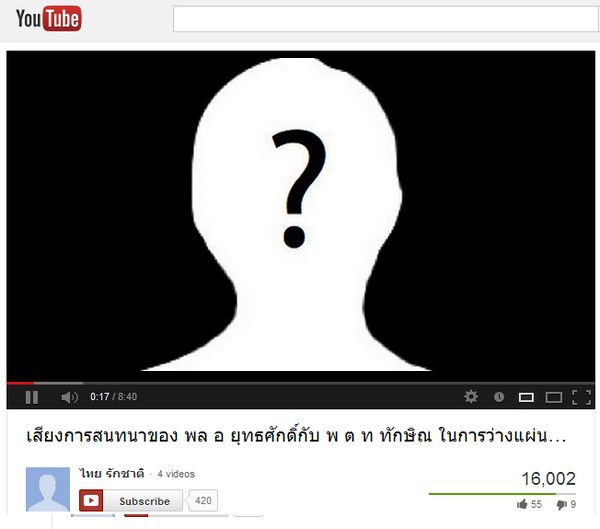 The four YouTube clips only have audio, so there is no proof - yet - of who actually is speaking.

The conversation was about a plan to push for an amnesty decree to quickly bring Thaksin home, the possibility of amending the Defence Ministry's regulations concerning a military reshuffle and appointments of military officers and other issues including the government's control of the armed forces.

Pheu Thai spokesman Prompong Nopparit said on Sunday the voices in the clip were unlikely to be of Thaksin and Gen Yuthasak, but had been dubbed by other people with the intention to create confusion and further conflicts in the country.

Mr Prompong said from his 28 years of experience in entertainment circles, the dubbing of the voices of important persons could be done to deceive or blackmail people, he said.

The spokesman believed more such clips would be posted online.

"I would like the people to know that the voices in the clip are not real. From now on, we can expect to see other similar clips posted online. It is the work of people who have been disappointed and are not getting what they want," Mr Prompong said.

He asked the opposition party not to exploit the issue.

Mr Abhisit said the issues discussed in the clip, if the clip is true, could stir trouble in the country and warned that an attempt to issue an amnesty decree would be unconstitutional.

He said there was no ground to come up with a decree on this issue and urged officials including the armed forces to work for the public interest.

"I'm worried about the country being pushed into a civil war because of their self interest," he said, expressing concerned about a possible return of street clashes.

He insisted that the Democrats would not push their version of an amnesty bill in parliament for fears of it being tampered with in the scrutiny stage with other versions that are being pushed by Pheu Thai.

Suthep Thaugsuban, a Democrat MP for Surat Thani province, voiced the same view, saying on his 65th birthday that people will take to the streets if a move to issue an amnesty decree was true. The attempt was a "bad move" which looked down on people and ignored the rule of law, he added.

Mr Suthep was a deputy prime minister in the Democrat-led government of then prime minister Abhisit which confronted the anti-government rally of the United Front for Democracy against Dictatorship leading to the bloody dispersal of protesters in 2010.

Gen Yuthasak said on Saturday that the voice in the clip was not his.

He said he never wanted to bring the armed forces commanders under his control or amend the Defence Ministry's administrative law.

He said he had never gone to meet Thaksin in Singapore.

Thaksin's close aide, Noppadon Pattama, on Sunday denied it was Thaksin's voice in the clip, saying it was falsified to damage the country and stir political confusion.