If Deputy Defence Minister Yuthasak Sasiprapa cannot prove he is not one of the two voices on a controversial audio clip said to be a conversation between him and former prime minister Thaksin Shinawatra, he should resign in disgrace, Senator Somjet Boonthanom said on Monday.

Gen Somjet said only Gen Yuthasak knows if the voices in the audio clip are real.

If he is not able to clear himself he should resign as deputy defence minister, because staying on in the position would damage the reputation of both the armed forces and his family.

To clear his name he should be prove that the voices had been faked, doctored or were otherwise not real, the appointed senator said.

If what was revealed by the clip was true, it would be a disgrace, because Gen Yuthasak is a former defence permanent secretary holding the rank of full general, he added.

Prime Minister Yingluck Shinawatra brushed aside speculation that Gen Yutthasak Sasiprapa will resign following the release of an audio clip featuring an alleged conversation between himself and ousted premier Thaksin Shinawatra. 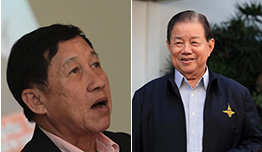 Ms Yingluck said yesterday Gen Yutthasak had talked to her on the telephone about the clip, but their conversation did not involve his resignation as deputy defence minister.

The prime minister, who is also defence minister, said Gen Yutthasak told her he did not know the details of the clip so he could not give her much information about the matter. The audio clip must be first examined by specialists to determine its veracity, she said.

Ms Yingluck said she did not think the clip would pose a problem between the government and the armed forces.

"The government and the armed forces give each other due honour and respect," Ms Yingluck said. "I believe there will not be any problem."

The voices on the audio clip talk about a plan to push for an executive decree to grant amnesty for Thaksin and quickly bring him home, the possibility of amending Defence Ministry regulations concerning the military reshuffle and how to take a complete control of the armed forces.

Gen Somjet said he had heard talk about issuing an amnesty executive decree several months before the parliament went into recess.

According to the audio conversation, purportedly between Gen Yuthasak and Thaksin, the armed forces would be drawn in to supporting an amnesty bill through the Defence Council. The bill would later be changed to an executive decree when the bill was considered by the National Security Council.

This conversation came to light amid the appointment of the prime minister to concurrently hold the defence portfolio and take control of the armed forces commanders, before an executive decree on amnesty was issued, Gen Somjet said.

He said that by issuing an executive decree the government could avoid the ordinary parliamentary process.

Because of this weak point, Thaksin had been duped by many people - including Labour Minister Chalerm Yubamrung, Samut Prakan MP Worachai Hema and Udon Thani red-shirt leader Kwanchai Sarakham - who repeatedly announced their intention of bringing him home.

In fact, none of them wanted him home because once Thaksin was back they would become meaningless, Gen Somjate said.

He said the mentioning of the supreme commander of Myanmar and the owner of a jade mine in the audio could also jeopardise relations between Thailand and Myanmar.

A source close to Gen Prem Tinsulanonda said the Privy Council chairman had learned about the controversial audio clip from the news media, but had not listened to it.

Gen Prem showed no reaction, probably because he is not in a position to make any decision regarding military appointments or reshuffles, since the power rests with the prime minister, the source said.

Moreover, it was not yet certain if the voices in the clip were really those of Gen Yuthasak and Thaksin, the source said.