The life of Phra Wirapol Sukphol in the monkhood finally came to an end on Saturday after monks in Si Sa Ket province decided to defrock him over his sexual affairs.

The decision was reached in a 40-minute meeting at Wat Pa Sri Samran in Muang district, which is the provincial ecclesiastical office. 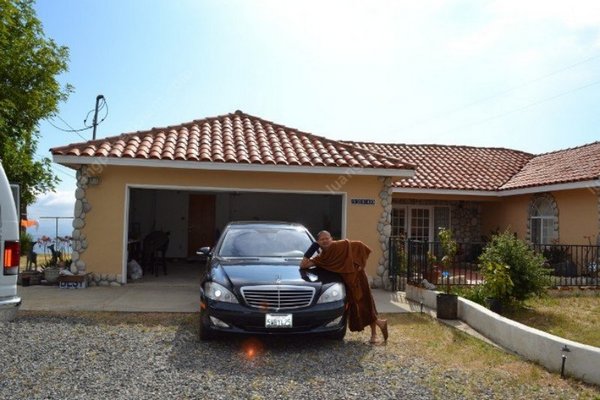 A photo on his website shows the former Luang Pu Nen Kham Chattiko at his California home. The ex-monk is believed to be in the United States, although it now is the subject of several legal cases in Thailand.

The meeting of senior monks focused on evidence involving allegations of sexual misconduct by the disgraced former monk. They based their decision on evidence supplied by the Department of Special Investigation and the Office of Buddhism in Si Sa Ket.

For weeks the public has been riveted by tales of the former monk's outrageously lavish lifestyle, private jet travel and shopping sprees said to have included dozens of cars.

The former monk faced accusations of fathering an 11-year-old boy and having sexual relations with women while he was in the monkhood.

The ruling in Si Sa Ket was made in absentia as the former monk is believed to be in the United States after leaving France. He ignored orders to return to defend himself as controversies mounted one after another.

The monks in Si Sa Ket got involved in the case as his Khantitham forest monastery is located in Kanthararom district of the northeastern province.

"He should be called Mr Wirapol Sukphol from now," said Amnart Buasiri, deputy director of the National Office of Buddhism.

Wirapol can appeal against the decision to the monk in charge of his region, and if he is not satisfied, his last resort is the Sangha Supreme Council, the official explained.

The former monk was ordained in 1999 at Wat Pa Don That in Pibul Mangsahan district of neighbouring Ubon Ratchathani province before building his empire at the forest monastery.

Though he was only 34 years old, he called himself "Luang Pu" by adding his ages in previous lives.

Phra Khru Watcharasitthikun, secretary to the chief monk of Si Sa Ket's Dhammayut sect, said leading monks in the province would decide later on the future of the forest monastery. He hinted that it could be properly registered as a temple.

The monastery also has more than 10 branches in other provinces, according to Nopparat Benjawatananun, director of the National Office of Buddhism. On Saturday he ordered the provincial offices where they are located to check whether they were illegally set up.

The former Phra Wirapol's decision not to register Khantitham as a temple kept the Si Sa Ket monks from looking into its activities, including its financial transactions.

Phra Ratchadhammakosol, chief of the Ubon Ratchathani monks, signed an order on Saturday to kick Wirapol out of the province after he defied an order to return to Thailand to fight charges of misbehaviour including drugs, money laundering and sexual affairs.

The former monk or his associates could not be reached for comment.

His followers had rallied for justice for the monk at several agencies but Mr Nopparat said their call was not justified as they did not have any documents proving that they were acting on his behalf.

The former monk has been implicated on eight criminal counts by the DSI.

They are false advertising to the public by claiming that he had had an audience with the deity Indra; alleged rape of a minor; tax avoidance on luxury cars; illicit drug taking; using fake educational certification; reckless driving; money laundering; and claims about supernatural powers.

The controversies came to light after images of the former monk living a life of luxury, including travelling in a private jet, were posted on social media networks.

The DSI is compiling evidence to petition US authorities to revoke Wirapol's visa so that he could be sent back to face legal action in Thailand.

Hotels, businesses and private hospitals should refrain from offering big discounts to lure tourists and focus instead on attracting the rich, says Anutin.