World Peace University closes down for good in Thailand

A grantee for an honorary certificate of the Universal Ministries of Thailand takes off his gown ordered by officials as it is the same as the one used by the World Peace University.

The controversial World Peace University (WPU) announced its abrupt closure on Sunday after its honorary degrees given to people with "good deeds" were alleged to be illegal. 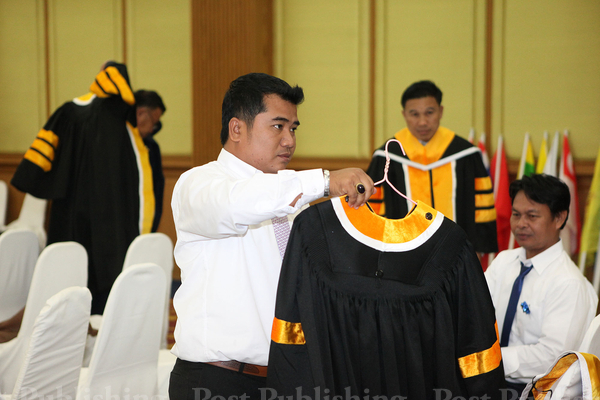 People waiting to receive an honorary certificate by the Universal Ministries of Thailand have to take off their gowns after it was felt that they were too similar to the World Peace University, which closed down on Sunday. (Photo by Pattarapong Chatpattarasill)

WPU rector Sawat Banterngsook announced that the university's operations in Thailand were closed after it had been declared illegal to operate as a university under the Private Higher Education Institute Act.

The Office of the Higher Education Commission (Ohec) said earlier this month that WPU was illegally formed as a university because it was only registered as a limited partnership. Deputy Education Minister Sermsak Pongpanit said it unlawfully used the status of university.

Mr Sawat said WPU in Thailand had come to an end. "I feel unsafe about doing educational tasks here, so I will do it in other countries instead," he added.

The group is still in the spotlight and being closely watched by education authorities and the Department of Special Investigation as it had granted honorary degrees to several hundreds of famous people including a follower of defrocked monk Wirapol Sukphol, formerly known as Luang Pu Nen Kham Chattiko. The DSI suspected its degrees were offered in exchange for cash. The group denied the allegation. 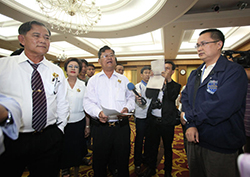 Officials from the Department of Special Investigation and the Education Ministry closely monitor the event at the Rich Hotel in Nonthaburi province on Sunday. (Photo by Pattarapong Chatpattarasill).

Mr Sawat told reporters earlier that it would grant honorary degrees to people who have done good deeds for the last time on Sunday at Rich Hotel in Nonthaburi province. He later released nine doves in a symbolic gesture at the event which was inspected by officials of the DSI and Ohec.

The organiser's name was changed from WPU to the Minister Ordination Ceremony organised by the Universal Ministries of Thailand (UM). The ceremony was held to confer "honorary certificates" to about 30 people.

Mr Sawat said this group of people should be offered the WPU honorary certificates, but it could violate the act, even though the WPU certificates had alread been printed. The intended recipients decided to not wear gowns supplied by the group as they were too similar to those used by the WPU.

Noppadol Konkam of UM claimed the group was a non-profit organisation and an affiliate of Universal Ministries of the United State of America, which grants honorary certificates to honour and provide moral support to people who have done good deeds.

He insisted that the certificates that were to be given out on Sunday belonged to UM, not the university.

Worapong Meekhuneiam, a DSI investigator who inspected the ceremony, raised the question of whether UM was granting honorary certificates on behalf of the university and wondered why the organiser's name was swiftly changed. "The people were wearing the same gowns," he said.

One intended recipient, Manawan Buakhao, head of the non-profit Romsai Foundation in Nonthaburi's Bang Kruai district which looks after children afflicted with HIV/Aids, said he deserved an honorary certificate as he had done good deeds for society for up to 11 years.

"I realise well that this certificate cannot be used as an academic reference and I intended not use it for that purpose as I already hold a master's degree," he said, adding that he had paid nothing to attend the ceremony.

Another intended recipient who asked not to be named said the honorary certificate was not granted to everyone, only to people who had done good deeds.

"It provides moral support to good people to continue doing good deeds. I would use this certificate for nothing, just show to our grandchildren that I have done good deeds for society," said the government official.

Surasri Sri-insut, chief of the village heads and kamnan association in Nonthaburi, walked out of the ceremony after DSI authorities asked the intended recipients not to wear the gowns because they were similar to the WPU's gown.

"I decide not to receive the certificate now as too many people had cast doubt on it," he said.