A special cabinet meeting on Wednesday decided to impose the Internal Security Act (ISA) in three districts of Bangkok from today until Aug 10 to cope with rallies planned to coincide with the reopening of parliament. 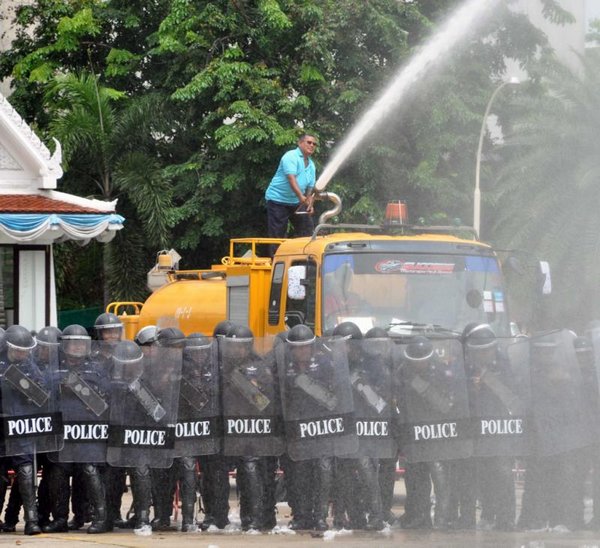 Riot police held a practice session and showed the media tactics they could use in case of violence during planned anti-government protests this weekend, including tear gas, mass arrests and (above) water cannons. (Photo by Wassayos Ngamkham)

The move was made the same day the opposition Democrat Party announced it was mulling organising a street rally to oppose the amnesty bill scheduled for House consideration.

The decision came after security agencies told the cabinet meeting that the ISA should be invoked.

The agencies argued that several anti-government groups had declared their intention to rally against the amnesty bill proposed by Pheu Thai MP for Samut Prakan Worachai Hema, which is set to be deliberated by the House of Representatives on Aug 7-8.

Lt Gen Paradorn said the rallies might draw a large number of protesters and the situation could escalate to the point that the protesters might seize government offices and obstruct the work of parliament.

Democrat Party MP Suthep Thaugsuban said the opposition party might organise a street rally against the amnesty bill. The rally is one of two options the party has planned for opposing it. Another option is through parliamentary mechanisms.

Mr Suthep was addressing the people during the forum ``Dissecting the Truth'' organised by the Democrat Party Wednesday evening. ``If the government insists on pushing through the amnesty bill and if the Democrat Party loses all the fights in the three readings of the bill, we will blow the whistle to encourage people across the country to vent their anger against the government,'' Mr Suthep said.

The military and the police must also stand by the people because the government would lose its legitimacy to run the country, Mr Suthep said.

Meanwhile, People's Alliance for Democracy (PAD) spokesman Parnthep Pourpongpan said the group will not take part in any of the demonstrations expected to be held.

However, the PAD still remains firm in its opposition to all amnesty-related bills, Mr Parnthep said.

Mr Panthep said the PAD leaders fear they could violate their bail conditions if they take part in the rallies. He said a total of 96 PAD leaders and supporters have been indicted on terrorism and other charges in connection with the occupation of Don Mueang and Suvarnabhumi airports in 2008.

After their indictment, they were granted bail on April 2 this year on the condition they not do anything which could be deemed as inciting unrest. Nor can they travel abroad without the court's prior permission.

United Front for Democracy against Dictatorship (UDD) co-leader Jatuporn Prompan said that red-shirt core leaders from across the country will meet at Don Muang Technical College on Saturday to discuss the political situation.

He said he will ask red shirts to stay away from the anti-government protest site, because what the other side wants is a clash.

Pheu Thai spokesman Prompong Nopparit said after a party meeting that the Worachai bill will go through the normal process of deliberation, without any efforts being made to push it through three straight readings. 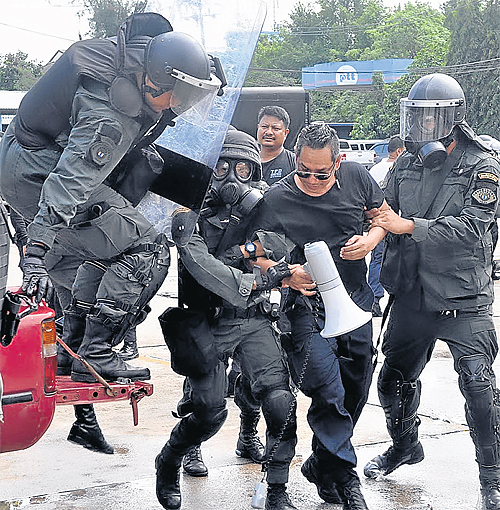 Riot police and commandos drill in preparation for anti-government rallies expected outside parliament on Sunday. Protesters have announced their intention to demonstrate against the amnesty bill proposed by Pheu Thai MP Worachai Hema to be deliberated during the new House session. WASSAYOS NGAMKHAM