Chief government whip Amnuay Klangpa on Monday said a panel set up to vet the amnesty bill engineered by Worachai Hema will be responsible for working out how the legislation affects Thaksin Shinawatra.

Mr Amnuay made the comment after whips agreed not to withdraw the amnesty bill - set to be debated on Wednesday - from parliament's agenda.

The bill spearheaded by the Pheu Thai Party MP for Samut Prakan sparked a rally of the People's Democratic Force to Overthrow Thaksinism (Pefot) on Sunday. The group vowed to block the bill amid suspicions that it could be used to benefit convicted former prime minister Thaksin Shinawatra, while the Democrat Party is to attempt to block the passage of the bill, despite being overwhelmed by a Pheu Thai majority in the House.

Asked whether Thaksin would benefit from the bill, Mr Worachai told a news programme on FM100.5 that the 35-member committee formed to vet the bill would play a key role in thrashing out the details of the legislation, after it passes its first reading in the house.

"It is up to the committee of 35 members. They will sit down together to find a solution to national conflicts,'' he said. 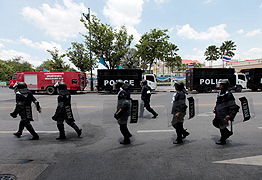 Policemen were deployed to provide extra security at Government House on Monday. (Photo by Chanat Katanyu)

Mr Worachai stressed that the real benefits of the bill will be to all protesters, minus the key leaders and those responsible for issuing orders that led to violence, regardless of which colour camp they belong to.

The bill scrutiny committee will be composed of five representatives from the cabinet, 17 Pheu Thai MPs, 10 Democrats and five MPs from other parties. It could start scrutinising the bill in just one week.

Mr Amnuay said the Worachai amnesty bill will be the only one on the parliament agenda this Wednesday, after Pheu Thai reiterated its position on backing the bill through parliament.

Pefot on Monday submitted a letter to key embassies in Bangkok to outline its position against the bill and the government.

The Pefot rally prompted the government to invoke the Internal Security Act (ISA) from Aug 1 to 10 in Phra Nakhon, Prompab Satrupai and Dusit districts and to step up security in areas near Government House and parliament.

Political tension also sparked rumours about a possible military coup, but any suggestion of such a move was quickly denied by Army chief Prayuth Chan-ocha, who said the rumours are groundless and spread by people who want to cause panic. He urged people not to believe unfounded stories.

"Spreading such rumours could damage the country and cause other countries to lose confidence in Thailand. People could panic. Telling people to store food is just too much," Gen Prayuth said.

The army chief said the army will adhere to what is right and stand by the side of the people. The law should be allowed to take its course should any situation flare up, he added.

Pefot on Monday submitted a letter to key embassies in Bangkok including the United States, the United Kingdom and Asean countries to explain its position against the bill and the government.

The letter was countered by the Foreign Ministry which contacted diplomats on Monday to discuss the political situation and the reasons behind the enforcement of the ISA.

Foreign Minister Surapong Tovichakchaikul, who is a deputy prime minister, said he was concerned the letter submitted by the anti-government group was inaccurate and would mislead other countries. "I hope other countries will understand the situation," he said.

The minister gave his full backing to the amnesty bill, saying that he already read it and that it would help both the yellow and red shirt groups, but not Thaksin.

On the mass anti-government rally led by Pefot at Bangkok's Lumpini Park, Prasarn Trairatvorakul, governor of the Bank of Thailand, said a prolonged political protest would hurt business investment and consumer consumption in Thailand.

The rally, which began on Sunday, aims to "overthrow the Thaksin Regime" in order to bring major reform to the country.

"If the demonstration is momentary it won't affect the economy. But if it prolongs the impact is likely inevitable," Mr Prasarn said. "I want all sides to take the country's best interest into consideration first because there are other issues that need to be dealt with and we should not create more problems."

Thailand's economy remains strong, so it can absorb the negative effects to a certain extent, he added.