Wat Pathum Wanaram, with the BTS skytrain track, where troops were stationed, in the foreground.

The ruling on Tuesday is the seventh by the courts to lay the blame for deaths during the suppression of the violent 2010 red-shirt protests on security forces. Three other deaths investigated were judged not to have been caused by the military.

Tuesday's finding on the Wat Pathum Wanaram inquest will be forwarded to police, who will in turn send the case to the Department of Special Investigation (DSI), which is handling criminal lawsuits against those responsible for the April-May 2010 deaths, according to lawyer Chokchai Angkaew.

He also said the Office of the Attorney-General would announce on Aug 26 whether it would file criminal charges against former prime minister Abhisit Vejjajiva and his deputy Suthep Thaugsuban for allegedly causing the deaths of Phan Kamkong, Charnnarong Polsila and Kunakorn Srisuwan - subjects of the first three inquests where the court identified military involvement. 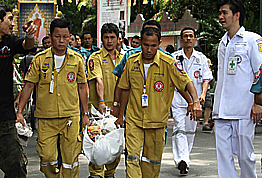 Rescue workers carry one of the six bodies found at Wat Pathum Wanaram on May 19, 2010. (Photo by Pattanapong Hirunard)

This is military calibre ammunition.

The court said these troops were from the 3rd Special Warfare Regiment's ranger battalion based at Erawan Camp.

The sixth victim, Attachai Chumchan, was killed by similar calibre bullets bullets fired by 2nd Infantry Battalion soldiers from the 31st Regiment of the King's Guard, who were stationed on Rama 1 Road, the court said.

The soldiers involved were placed in charge of the areas on orders from the Centre for the Resolution of Emergency Situations (CRES), the court said.

The bullets were clearly fired from areas where the military was in charge, the court said, although the inquest could not identify who actually shot the six civilians dead.

The court in its judgement said Justice Ministry forensic officials, who appeared on the scene before police forensic experts, found no gunpowder particles on the six bodies.

It said testimony by military officers as to the presence of armed black-clad men was conflicting, ruling out the men-in-black as having responsibility in the six deaths, as claimed by the authorities.

The court said the incidents took place during the day and the media was also present, but there were no pictures that might link the men-in-black to the six killings.

Special warfare soldiers had testified that they noticed four armed men in black and soldiers' camouflage inside the temple grounds, while King's Guard soldiers testified that they exchanged shots with men-in-white and men-in-black near Chalermphao intersection, but there were no photographs, the court said. 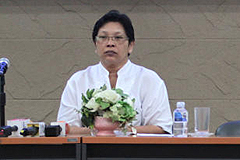 The court also said there was no evidence of weapons being stacked or piled inside Wat Pathum Wanaram, as alleged by the authorities.

Payao Akkahad, the mother of nurse Kamonkade whose body was found in the temple grounds, said she felt some justice had been done by the ruling, but society had still to hunt down the real culprits so they could be punished and there could be an end to impunity in Thailand.

Pol Lt Col Theerawat Chumchan, brother of victim Attachai Chumchan, said this was a beginning, a first step towards justice.

"At least, we know now that the red-shirts inside Wat Pathum Wanaram did not have weapons, as claimed by the authorities at the time, and that there were no men-in-black involved, as rumoured," said Pol Lt Col Theerawat.

He said his family had waited three years for the inquest to be concluded. Now they would look forward to taking it further, no matter how long it would take, to bring those who ordered the lethal crackdown, and the people who fired the shots, to justice.

Thawil Sailampoh, 64, uncle of Akkradet Khamkaew, and Khan Sriraksa, 65, father of Suwan Sriraksa, both expressed relief and satisfaction that the court had finally ruled that the military was responsible for their deaths. 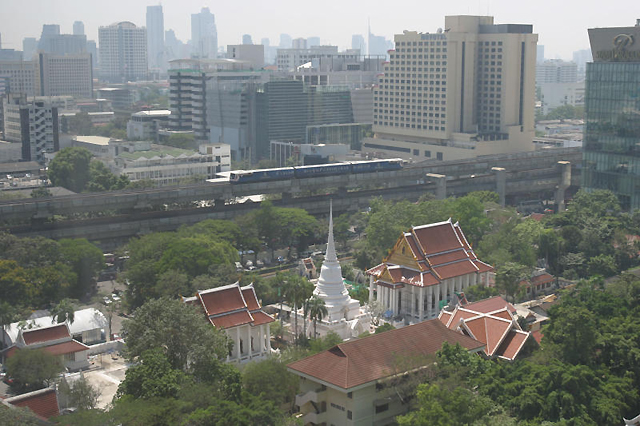 Pathum Wanaram temple is located in the city centre near to the Siam Paragon shopping complex. (Photo by Sayant Pornnantharat)