Thai Public Broadcasting Service chief reporter on security, Sermsuk Kasitipradit, has told police that he clearly indicated in an online message about a coup that any rumours were unfounded and unrealistic. 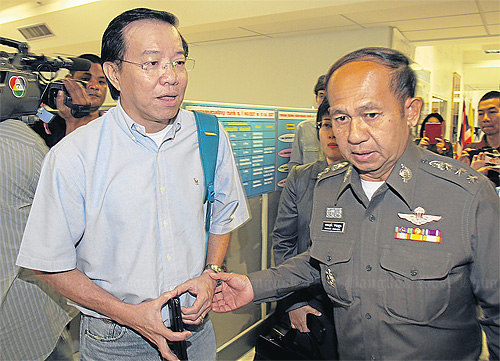 Sermsuk Kasitipradit, chief reporter on security at the Thai Public Broadcasting Service, reports to the Technology Crime Suppression Division on Chaeng Watthana Road on Friday to answer questions about his posting of messages on the internet warning of an impending coup. TAWATCHAI KHEMGUMNERD

During an 80-minute meeting with officers from the Technology Crime Suppression Division (TCSD) on Friday, Sermsuk said if his message was interpreted as having bad intentions, that was not how it was meant to be.

Sermsuk was among four people summoned by the TCSD after being accused of posting messages on the internet warning of an impending coup and urging the public to hoard food and water.

The others are Dechathorn Teerapiriya, a red-shirt leader in Chon Buri, Warunee Kamduangsri and another person who uses the name "Yo Onsine" on social media.

Sermsuk admitted to posting comments regarding the coup rumour, which circulated in light of the anti-government protest against the House's consideration of a controversial amnesty bill. He said, however, that his reason for posting the comments was to explain that a coup was impossible or improbable.

Sermsuk said he had made an analysis of the rumours and suggested they were baseless and unrealistic.

TCSD deputy commander Pol Col Wannawut Channugool said Sermsuk had only been called for initial questioning. Whether he would be charged under the 2007 Computer Crime Act would be finalised after considering his intent and the evidence.

If there were no grounds to the accusation, police would not pursue the charges. At the moment there was nothing to worry about, he said.

A person found guilty under the law could face five years in prison with a likely fine of 100,000 baht.

Nakhon Chompoochart, Sermsuk's lawyer, said no charges had been laid as police still have to talk to others involved and hear their explanations.

"Mr Sermsuk is a netizen and a media man who has a duty to collect and analyse information before he reports on movements or comments about a rumour of a coup plot," Mr Nakhon said.

He said the issue with his client clearly exposed the problematic aspects of the Computer Crimes Act.

"The law should stipulate more explicitly and more thoroughly the definition of offences and should reflect the nature of the internet's purpose for general use.

"If we interpret issues simply upon the wording without looking at the sincerity and intention of the user, there might be a problem," Mr Nakhon said.

Meanwhile, professional media associations warned the TCSD about violating the law by summoning social-media users over their Facebook posts.

The TCSD should not act under political pressure and over-use its powers, as that could be considered as a bid to intimidate the general public. That could violate the criminal code regarding malpractice.

The Thai Journalists Association will meet today to decide its view on the police taking action against Sermsuk.