Students made to wear 'blinkers'

A photo of students taking exams while wearing paper blinker hats meant to prevent them from cheating was not intended to humiliate the students, Kasetsart University (KU) Student Administrative Board says. 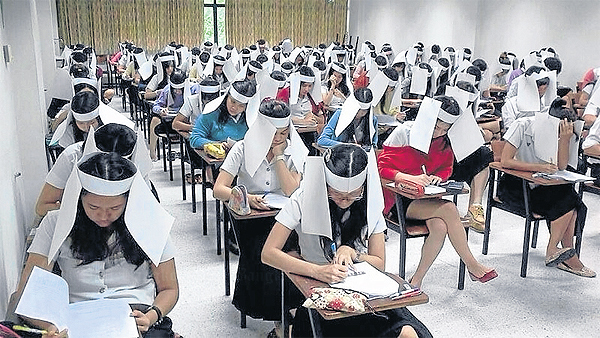 This is the photo that launched a thousand quips. Students wear paper blinker "anti-cheating" headgear as they take an examination at Kasetsart University's agro-industry faculty.

Some said the hats _ fitted with paper ear flaps to prevent students from looking at each others' answer sheets _ insulted the students' dignity.

Nearly 100 KU students were pictured wearing the hats in a room during an examination at the agro-industry faculty.

The KU Student Administrative Board posted the photo on its Facebook page on Wednesday.

The board later issued a statement apologising for igniting the controversy.

It has since removed the picture from its Facebook page, citing a slew of negative reactions.

The issue sparked various reactions on Facebook and other popular websites including Pantip.com.

Facebook user Burn Noppachai said the board issued the explanation only to protect itself. A Pantip user named ATICUS_T said students sometimes had to wear the hats against their will.

Another user, FeoLiiTa, said some students might find the hats distracting, causing them to perform poorly on the tests.

Some, however, offered sympathy to the teachers, suggesting the issue should not be taken too seriously.

Thammasat University political scientist Kasian Tejapira said he felt pity about what he saw in the picture.

Mr Kasian said that using hats to prevent cheating was unheard of, even in high schools. The anti-cheating helmets may be an indication of poor education, he said.

Using the hats was a failure even if everyone in the room passed the exam, he said on his Facebook page.

The students were treated as if they could not be trusted, Mr Kasian added.

Sangsit Piriyarangsan, dean of the College of Social Innovation at Rangsit University, said the practice was excessive and unnecessary.

The picture damaged the university's reputation and reflected a failure of the education system, Mr Sangsit claimed.