The battle for Pattani's fish

Every day the small-scale fisherfolk in Pattani Bay face a struggle to protect their livelihoods from the giant fishing fleets backed by seemingly limitless financial resources and the best and most destructive equipment imaginable. Villagers make a living from raising fish in baskets along the shores of the bay. PHOTOS BY ACHARA ASHAYAGACHAT

Life is hard enough for the villagers with their small boats and knife-edge finances. As resourceful as they are, they cannot match the large-scale operations which sweep through their area, clearing it of the sea's life-giving natural bounty.

This hardship, however, has taught the fisherfolk in the villages that giving up is not an option. Inherent in their genes is a fighters' spirit which has imbued them with the belief that they can overcome problems through collective force.

Fadilah Sa-Ah, 21, of Patabudi village in Yaring district, enjoys life as a fisherman's daughter. Since high school, she has come to understand from her elders the problems her community faces. The villagers have also gained a lot of knowledge from fishing communities on the Andaman coast on the western shoreline of the South who went to Pattani to share their grievances, especially about destructive fishing techniques.

Now in her final year at Prince of Songkla University's Pattani Campus, the geography-major has embarked on a task few people her age would want to carry on their shoulders. 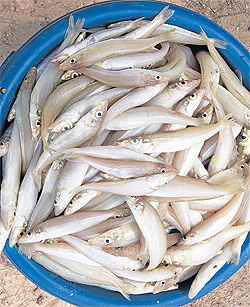 A basket of fish is filled after a hard day’s work. Small-scale local fisherfolk fear the intrusion of large fishing boats will deplete fish stocks in the Pattani Bay area.

She is steering a group of about 20 young people from her village and nearby areas through a research project to assess local fishing wisdom in Pattani Bay. The focus is on Ta Chi cape that juts out into the Gulf.

The young activists, who called themselves Ah Noh Lao or "children of the sea", have built up a network of people within the province. They have also hooked up with other advocacy groups from Yaring to Mai Kan districts.

The activists have received support and coaching in conservation activities over the past five years from the Traditional Fishermen Association based in Nong Chik district and the Pattani Coastal Resources Rehabilitation Project.

The young people share their experiences of fishing life with their friends from the Andaman coast and from the upper section of the Gulf of Thailand. These exchanges are helping to forge cultural ties and strengthen the network for future environmental projects.

The village of Patabudi is at the tip of Ta Chi cape which serves as a natural breakwater for fishing boats. The villagers there have shown their resolve over the past decade and earned respect for their unwavering fight to spread awareness about the sustainable use of sea resources.

The Children of the Sea have a monumental campaign ahead of them as members will be torch bearers in the villagers' efforts to keep their traditional way of life intact.

The young villagers, armed with a higher education, are what the villages need to mount a defence against the intrusion by medium- and large-scale trawlers in a legally complicated and increasingly complex problem.

The Administrative Court in 2006 threw out an appeal lodged by the medium- and large-scale trawler owners who insist the Pattani province's order to ban their boats from Pattani Bay violated their constitutional rights.

However, villagers said what happened in the court has not stopped fishing by large boats which are blamed for depleting fish stocks in the bay area. 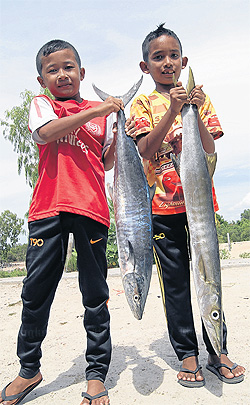 Watemon Boonpongsri, chief of the provincial fishery office, said agencies concerned have been discussing a possible solution to the conflict between the small-scale fisher folk and big trawler operators.

The problem has been raised with parliamentarians and the Southern Border Provinces Administrative Centre with input drawn from the parties in conflict.

The villagers using traditional and simple fishing gear fear marine life in the bay will be wiped out unless stringent rules are laid down and enforced.

Several options have been floated, Mr Watemon said. They include modifying some of the small fishing boats as tourist vessels to earn extra income and banning boats that are too large from entering the bay.

Also, boats with sophisticated fishing equipment and technology may be refused entrance. This will prevent them from wiping out immature sea creatures. But, Mr Watemon conceded, this is a sensitive issue.

The trawlers generate substantial revenue for the national economy and the rules to be set must be studied carefully as they involve many boat operators nationwide, he said.

About 200 medium and larger trawlers operate in Pattani Bay.

He maintains the authorities are not sitting on their hands in regards to enforcing the law. In fact, they have arrested trawler operators who violate the regulations during routine patrols.

Debate continues over the equipment that can be used by the fisherfolk - regardless of whether they operate small or large boats - in specific areas of the bay. A scientific study will be considered before the criteria are set.

"Hopefully, everything to be completed within six months," he said.

Meanwhile, the Traditional Fishermen Association has remained steadfast in monitoring laws and regulations to be followed in conserving maritime natural resources.

Mr Muhamasukree said the 83,000 people relying on small fishing set-ups in six coastal districts of Pattani remain in conflict with the push-net operators, especially those active in Muang, Mai Kaen, Sai Buri and Panare districts. The unscrupulous operators often change tactics and modify their gear to take large hauls from the sea.

"It's the fight to maintain the sufficiency philosophy and the Islamic teachings of taking things upon Allah's provision," Mr Muhamasukree said.

"Our fishing folk rely on natural habitats and resources in building boats and helping each other at sea and we take only what we need and what our boats can carry.

"On the other hand, the commercial trawlers scoop up everything in their path and they don't let nature recover and replenish." 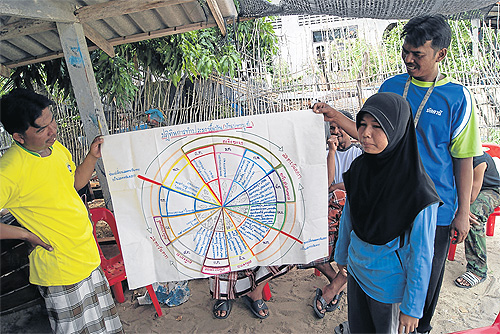 Fadilah Sa-Ah, 21, right, a young environmentalist, explains to visitors the life cycle of fish and marine creatures andhow to conserve them at her village of Patabudi in Yaring district of Pattani. 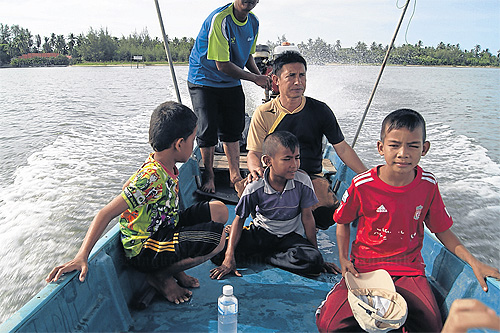 Muhamasukree Masaning (sitting, centre) of the Traditional Fishermen Association, takes a boat ride with village youngsters in the bay during a trip to see the ecology of the area. 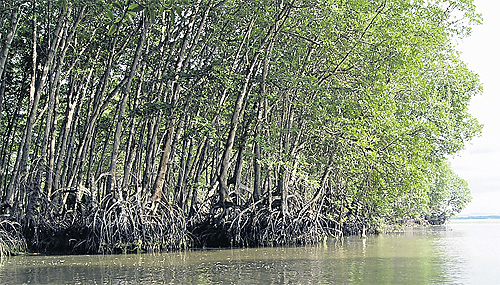 Mangroves and sea grass are protected as they become breeding grounds for fish and other marine life. 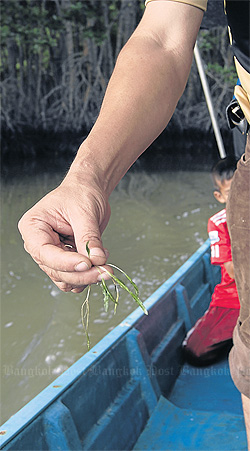 Muhamasukree Masaning shows village boys sea grass picked near the shore and explains how it is important for the food chain in the Pattani Bay ecology.