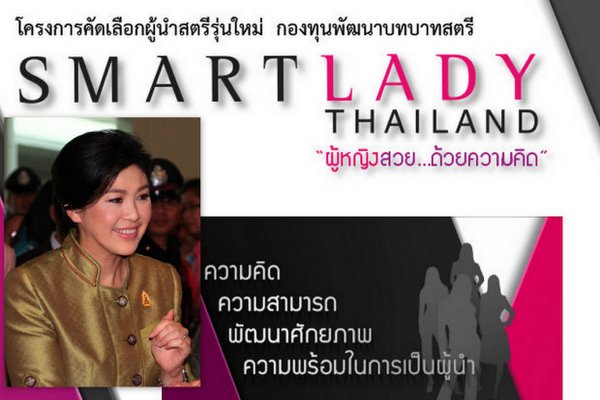 PM's secretary-general Suranand Vejjajiva Monday warned the opposition leader to be careful with his remarks as anything he said would reveal who was stupid and who was smart.

Mr Suranand was responding to a controversial comment Mr Abhisit made during a rally on Saturday.

The Democrat leader had mentioned the launch of the "Smart Lady Thailand" reality show during the rally.

He questioned the merits of the reality show, presided over by Ms Yingluck. Mr Abhisit's critics inferred from his comment that he was saying that if there was to be a stupid woman contest, then no one could compete with Ms Yingluck.

This prompted Mr Suranand, who is accompanying Ms Yingluck on an official trip to Europe, to write an email countering Mr Abhisit's remarks.

The PM's secretary-general said the project was aimed at developing the leadership of women and encouraging Thai society to admire the beauty of women through their intelligence.

He asked the Democrat Party to scrutinise its past performance when it was in government to find out whether it had done anything for women.

Mr Suranand said as far as knew, the party had done nothing as it placed emphasis on making derogative remarks and looking down on women.

Charoensri Chaikhat, head of the Phayao Women's Network, warned Mr Abhisit to exercise extra caution when speaking, as he previously served as a government leader.

"A leader must be more careful in making remarks and being respectful to others. Everyone has his or her dignity.

If we don't respect other people, it's hard for us to be respected," she said.

Watcharaporn Intawong, deputy head of the Phayao Women's Network, said the roles of women have been recognised at both local and national levels. Female leaders could not reach such high positions if they had no ability, she added.

She criticised Mr Abhisit for making insulting remarks about women, saying a man who used to be a government leader should not have said such things.

"Mr Abhisit should review his remarks and take responsibility by withdrawing what he said. There are plenty of good words that he could choose from.

More importantly, politicians of all levels should refrain from using gender issues to politically slander or look down on others. A good leader must scrutinise the work of others rationally," she said.

Mr Abhisit Monday denied referring to any particular person when he said the words "stupid woman".

The Smart Lady Thailand project has its own website at www.smartlady-thailand.com/, as well as a major presence at a Facebook page.