Sondhi gets 2 years for lese majeste

The Appeals Court on Tuesday sentenced Sondhi Limthongkul, a core member of the People's Alliance for Democracy, to three years imprisonment after finding him guilty of lese majest, reversing the lower court's decision which acquitted him of the charge.

The prison sentence was reduced by one-third to two years in jail because his testimony was deemed useful.

Mr Sondhi was charged that on July 20, 2008 he went up the stage and made a speech at a rally of PAD supporters at Makkawan Rangsan Bridge over a loud speaker. 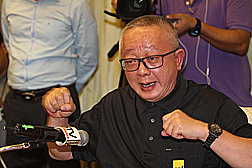 The speech was broadcast on ASTV television channel and on its website, which could both be watched by Thais and foreigners inside and outside the country.

Mr Sondhi was charged with lese majeste under Section 112 of the Criminal Code.  He denied the charge.

The lower court acquitted him of the charge. The prosecutors appealed.

The Appeals Court found Mr Sondhi guilty as charged, reasoning that it was not necessary for him to repeat Ms Daranee's remarks in public.  In doing so, Mr Sondhi caused other people to know what Ms Daranee had said and to talk about it, thus affecting the monarchy.

The court sentenced him to three years in jail, reduced to two years for giving useful testimony.

Mr Sondhi's lawyer submitted a request for bail, offerng a 500,000 baht surety. The court approved  bail on the  condition he cannot leave the country without court permission.