An anti-Thaksin Shinawatra coalition says it will call a mass rally as soon as the controversial amnesty bill passes its third reading in the House of Representatives. 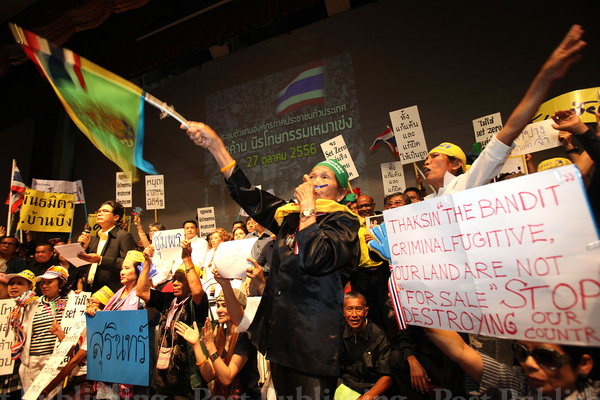 The coalition, made up of civic networks from all 77 provinces, decided on the move at Sunday's meeting at Thammasat University's Tha Prachan campus.

The university's auditorium was packed with 1,000 anti-government group members. The meeting was chaired by Somkiat Pongpaiboon, a former leader of the People's Alliance for Democracy (PAD).

Suriyasai Katasila, the network's coordinator, said the mass protest will take place the day after the amnesty bill is passed. The coalition will not wait until the bill is vetted by the Senate.

The second and third readings of the bill are expected to take place next month.

Mr Suriyasai said the groups will also rally if the International Court of Justice (ICJ) rules against Thailand in its territorial dispute with Cambodia. The ICJ is expected to rule on the Preah Vihear temple dispute on Nov 11.

Mr Somkiat has been assigned to coordinate with the civic networks as they prepare for the anti-amnesty protest.

Mr Suriyasai expressed confidence the rally will draw a larger crowd than the yellow-shirt PAD's anti-Thaksin protest which led to the Sept 19, 2006 coup.

He said people will take to the streets because the amnesty bill will destroy the justice system and whitewash deposed prime minister Thaksin.

According to Mr Suriyasai, the scrutiny committee which amended the bill expanded it to cover the period 2004 to Aug 8, 2013, to exonerate Thaksin of any wrongdoing in connection with the Tak Bai clash and help those implicated in the rice-pledging scheme evade punishment.

Mr Somkiat reportedly told the civil networks to stay patient and refrain from violence. He warned that a wrong move could backfire on the movement.

Democrat list-MP Ong-art Klampaiboon yesterday called on Prime Minister Yingluck Shinawatra to admit that getting the amnesty bill passed is at the top of the government's agenda.

He said the amnesty bill is intended to whitewash those involved in 16 corruption schemes. The cases implicate 75 people, including Thaksin, he said.

"The prime minister is more concerned about her interests and her clan's than the people's. She must think carefully before the bill goes to the second and third readings," he said.

Mr Ong-art said the amended version of the bill is likely to be unconstitutional because it was significantly changed and so was not in line with the bill's principle approved by the House in the first reading.

Noppadon Pattama, Thaksin's close aide, said he understands how opponents of the bill feel, but asked them not to use it as an excuse to hold a rally to topple the government.

He said the amnesty bill is necessary to counter the effects brought by the 2006 coup, which he described as against the rule of law. "We have to find a way out together," he said.

"The rehabilitation and amnesty processes are going through an open parliamentary process.

"It is not the same with the coup which is wrong and the beginning of the violation of the rule of law," he said.

Pheu Thai MP Worachai Hema, whose amnesty bill was drastically changed by the House scrutiny committee, said he will vote against Section 3 and Section 4 in the amendment draft during the second reading. In the third and final reading he will abstain from voting.

Pheu Thai spokesman Prompong Nopparit said Sunday the ruling party is expected to issue a resolution on the amnesty bill when it meets tomorrow.

He said the party MPs will be required to follow the party's resolution when it is time to vote on the bill.

Mr Prompong called on red-shirt MPs to endure the pain, overcome their concerns and vote for the amnesty bill "for the country's sake".