A red-shirt group has announced it will mobilise more than 10,000 people to oppose the government's blanket amnesty bill. 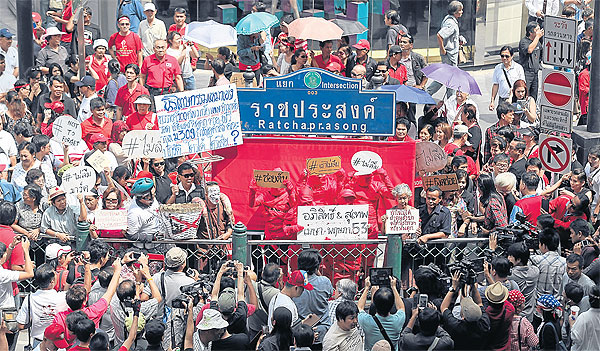 More than 200 red-shirt activists led by the Red Sunday Group gathered at Ratchaprasong intersection at noon yesterday to express their dissatisfaction with the amnesty bill.

The bill, which has been modified by a House scrutiny committee, seeks to grant a blanket amnesty to all people involved in political unrest since the Sept 19, 2006 coup. This includes protest leaders, soldiers and authorities.

The group voiced particular opposition to the amnesty for Democrat Party leader Abhisit Vejjajiva and Surat Thani Democrat MP Suthep Thaugsuban, whom they charged were responsible for the military crackdown on red-shirt protests in Bangkok in April and May 2010.

Mr Abhisit was then prime minister, while Mr Suthep was deputy prime minister in charge of the now-defunct Centre for the Resolution of the Emergency Situation, which handled the government's response to the 2010 protests.

A 73-year-old woman who joined the rally yesterday said she could not accept the Pheu Thai Party's bill although she would like to see its de facto leader Thaksin Shinawatra return home.

She claimed she was among the last people at the 2010 Ratchaprasong protest during the crackdown before the Siam Cinema was set on fire.

"There was no one there but soldiers. I cannot let Abhisit Vejjajiva and Suthep Thuagsuban off the hook for the crime they committed," she said.

Sombat Boongam-anong, 46, a core member of the Red Sunday Group, said the party's move to provide a wholesale amnesty was beyond his understanding and ran against the red shirts' stance.

"Thaksin and other party leaders fail to explain to their supporters what is really behind this compromise deal. They must tell us. Politics can no longer be kept exclusive and dictated by back-door negotiators," Mr Sombat said.

He said the Pheu Thai Party is dominated by wealthy members but it still needs the support of the people.

These supporters want the party to go back to the original amnesty bill proposed by Samut Prakarn Worachai Hema.

Thaksin had put the number of the bill's opponents at no more than 10,000.

"More people will come out on the street if the party defies the will of the red shirts who shed blood and tears to put it into power," Mr Sombat said.

"If fewer people come out, Pheu Thai will win in this game."

Mr Sombat said he was not concerned with the ongoing anti-government demonstrations, as he believed there were no compelling issues that could overthrow the elected administration.

"But this amnesty bill has unnecessarily attracted more people to join the critics' cause and prevent the government from improving its performance," he said.

Somsak Jeamteerasakul, Thammasat University history lecturer, said the red shirts felt cheated as they had shown full support for the Worachai bill which was later changed.

"If the Pheu Thai Party had made it clear from the beginning that they would come up with this compromise deal, the red shirts would not have felt cheated," Mr Somsak said.

Suchart Nakbangsai, 55, a former lese majeste convict, said if the ruling party allowed Mr Abhisit and Mr Suthep to get away with their actions, lese majeste offenders should also be included in the deal.