The Department of Special Investigation (DSI) has decided to indict former prime minister Abhisit Vejjajiva and his former deputy Suthep Thaugsuban on a case-by-base basis for each of the charges they face, DSI chief Tarit Pengdith said. 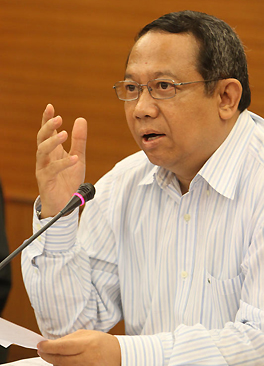 DSI chief Tarit Pengdith said Abhisit Vejjajiva and Suthep Thaugsuban will be indicted case-by-base for charges in relation to political violence in 2010. (Photo by Pornprom Satrabhaya)

Mr Tarit made the announcement after a meeting of DSI investigators following the Office of the Attorney General's decision to indict Democrat Party leader Abhisit and Democrat core member Suthep on murder and attempted murder charges for their roles in ordering the Centre for the Resolution of the Emergency Situations (CRES) to quell anti-government protests in 2010.

The meeting agreed to indict the two on a case-by-case basis, although prosecutors recommended that the cases against them be combined into one.

Only incidents which took place at the same time and location would be combined by the DSI, he said, although it will be up to the court to decide whether to handle the cases one by one or not.

He added that the DSI and metropolitan police investigators have agreed not to take legal action against soldiers who honestly performed their duties as ordered by their commanders, since they are protected by Section 70 of the Criminal Code.

If passed into law, the revised amnesty bill currently being debated in parliament offers a blanket amnesty to all involved in political protests from the Sept 19, 2006 coup until Aug 8, 2013.

Mr Abhisit confirmed on Tuesday that he is still determined to oppose the altered bill, which would offer him amnesty, even though the Office of the Attorney General is indicting he and Mr Suthep.

It has been suggested that the indictment was intended to force Mr Abhisit and Mr Suthep to accept the amnesty bill, but the Democrat Party leader said he was confident of his innocence and ready to fight the cases against him in court.

The outcome of cases against him would set a precedent on how to handle illegal armed protests in the future, he said.

Mr Abhisit said many people are unaware that he and Mr Suthep have also had civil lawsuits lodged against them by people who say the authorities did too little to prevent their property from being set on fire during the political unrest in 2010.

He said he and Mr Suthep stood to be blamed by several groups, but insisted he was ready to fight the cases against him, all the way to the Supreme Court.

He added that he did not understand why orders issued by CRES were being construed as offences that he had personally committed by the DSI, but insisted he and Mr Suthep would not change their minds and support the amended amnesty bill, which is due for debate in its second reading in the House on Wednesday and Thursday.

The bill is really aimed at bringing fugitive former prime minister Thaksin Shinawatra home and enabling him to reclaim the 46 billion baht confiscated by the court and has nothing to do with reconciliation, the Democrat leader said. 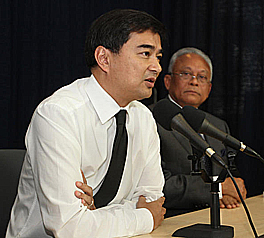 Mr Suthep, Democrat MP for Surat Thani, said he will invite opponents of the amnesty bill to stage peaceful protests nationwide when the legislation reaches its second and third readings in parliament.

He warned Prime Minister Yingluck Shinawatra she may alienate herself from the people of Thailand if the bill is not withdrawn.

Mr Suthep claimed Attorney-General Atthapol Yaisawang's order to indict he and Mr Abhisit was likely intended to coerce them into accepting the government's blanket amnesty for corrupt murderers who "burnt down the city".

He added that he did not understand why the Office of the Attorney General rushed to announce their indictment to the press on Monday, when he and the opposition leader already had an appointment to meet public prosecutors on Thursday.

The former deputy premier meanwhile accused Office of the Attorney General spokesman Nanthasak Poonsuk of lying during the press briefing when he said there was no evidence that armed "men in black" were present during the 2010 riots.

He said a DSI probe submitted to the OAG detailed terrorism charges against 26 people including Thaksin, although the former premier was not indicted. Parts of the document stated clearly that there was credible evidence to suggest the “men in black” were a militant arm of the red-shirt United Front for Democracy against Dictatorship (UDD) who ambushed soldiers with deadly weapons and bombs.

Public prosecutors studied the report and decided to indict 24 suspects for terrorism. Therefore, Mr Nanthasak could not deny that "men in black" contributed to the 2010 violence, prompting him to order security forces to use live ammunition in the crackdown on the protests in his capacity as then director of the CRES.

Mr Suthep added that an attorney-general representative attended every CRES meeting and never suggested that any of his orders was illegal.

"I want to send this message to Prime Minister Yingluck to tell you that it's time for you to decide and stop the excuses. As the premier, you can order government to withdraw the bill today. But if you prioritise the interests of your brother and family and forget the people, I warn you that you may no longer be standing on steady ground," he said.